The building between the car park and lake is the engine house from the part of Dinorwig slate quarry known as Hafod Owen. It was dismantled in the 1970s and rebuilt here for preservation.

Hafod Owen was near the shore of Llyn Peris at the far south-eastern end of the quarry. It was named after the previous farm on the land. Quarrymen dug a huge pit as they followed the slate vein downwards. In 1894 a very steep incline was constructed from the bottom to a gallery within the pit. The engine house stood on the gallery.

Most inclines at Dinorwig quarry worked using gravity – the weight of the full wagons going down pulled the empty wagons back up, with just a brakeman needed to control the descent. However, powered equipment was needed at Hafod Owen to haul the laden wagons up from the pit. Empties were lowered on the adjacent track at the same time, providing a counterweight. 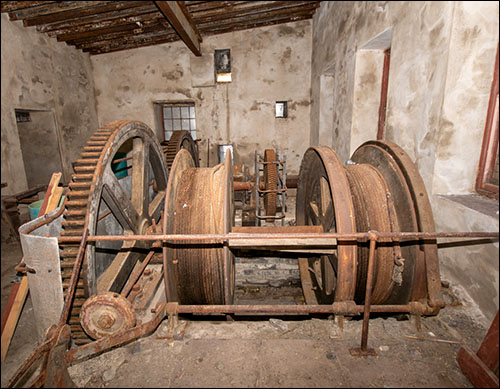 The haulage cables emerged through holes in the engine house’s gable and passed over the large pulleys you can see on the separate structure nearby. The uppermost rails of the incline are visible below the pulleys, showing the steep angle of descent.

The incline was a table incline, similar to (but steeper than) the restored V2 incline a short distance north east of here. Each track had a carriage which provided a level “table” on which the slate wagons were carried. An aerial ropeway also lifted slate from the pit.

After quarrying finished at Hafod Owen, the bottom of the pit became a deep lake. Plans for the underground power station beneath Dinorwig quarry involved dumping excavated material into the pit. That would have buried the engine house, but the National Museum of Wales and Central Electricity Generating Board arranged for local engineering company Hills & Bailey to dismantle it in 1974.

The company numbered each stone – some of the painted numbers are still visible. It made sketches and took photographs. Everything had to be removed through a low tunnel, which is possibly why scrap merchants had not removed the machinery. With the help of a stonemason, the company reassembled the building in 1975.

Some surviving machinery still remains inside the building and includes a large compressor in the lean-to section which provided compressed air to operate rock drills and other quarry tools. Also some of the winding mechanism is still in the main section of the building.

With thanks to Mike Bailey, Paul Sivyer and Dr Dafydd Gwyn