This chapel, now home to the Cornerstone centre, was built using stones brought to Cardiff from around the world as ballast in ships. Several memorials, including two war memorials, were discovered during renovation and put back on display.

The original Ebenezer Congregational Chapel here was completed in 1828 and enlarged several times as Cardiff’s population grew. It was rebuilt in the 1850s to a design by Robert George Thomas who had emigrated to South Australia aged 16. There he worked with surveyors and met William Parry James, with whom he ran an architectural practice in Newport in the 1850s. Robert returned in the 1860s and designed many of Adelaide’s notable buildings. 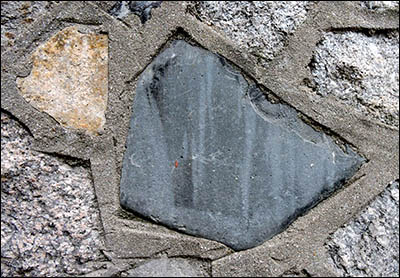 Coal-carrying ships often returned empty to Cardiff with stones from their previous ports of call in their holds as ballast, for better stability at sea. In Cardiff, locally quarried stone was often in short supply because the town was growing quickly. Clean stone from ballast was often used for buildings.

When it opened, this chapel’s walls were said to be entirely made of ballast apart from the Bath Stone dressings (at the corners, around the windows etc). It was also claimed that it contained stone from every country in the world! Neither claim was true, as the wall contains local Millstone Grit quartz conglomerate, Carboniferous Limestones, Old Red Sandstones and Pennant Sandstones. However, a large proportion of the stone is exotic, including several varieties of granite and dolerites, schists and basalt.

The stone pictured here is a weathered Columnar Basalt. This type of volcanic rock is found in various places around the world, famously at Giant’s Causeway in Northern Ireland.

The chapel was latterly used for Welsh-language Independent services, when it was known as Capel Ebeneser. It closed in 2010 because the backlog of building repairs was unaffordable. After a restoration project helped by a £1.2m Heritage Lottery Fund grant, it was reopened by Prince Charles in 2016 as Cornerstone, a venue for arts events, community and business meetings, weddings and other activities. The Sunday School room became the Pantry café.

With thanks to Michael Statham, of the Welsh Stone Forum