The building with the tall arched windows, now home to a café, was erected in 1927 as an electricity substation for the Mumbles Railway. The railway ran along the bay between Swansea and Mumbles. 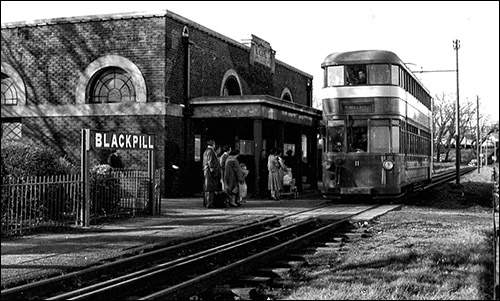 The windows might seem ornate for an industrial building, but the railway’s Black Pill station was on the seaward side of the substation. Notice the station name above the canopy which provided shelter for waiting passengers. The photo, courtesy of Phil Trotter, shows a Mumbles Railway tramcar at the station.

Parliament gave powers in 1804 for the Oystermouth Tramroad to be built. Initially it carried limestone and other goods in wagons drawn by horses. It terminated at Oystermouth and included a branch line from Black Pill to mineral sites in the Clyne Valley.

In March 1807 it launched a passenger service – making it the first passenger-carrying railway in the world. The passenger business soon became more important to the railway than carrying goods. Steam power was introduced in the late 1870s, and the line was extended to near Mumbles Pier in 1898.

The Mumbles Railway converted to electric operation in 1929. The substation fed power at 660 Volts (Direct Current) into the wires above the tracks. The tramcars collected the electricity from the wires as they moved along.

The growth of bus services after the Second World War provided competition for the Mumbles Railway, which closed in January 1960.