The views you can enjoy from the top of Castle Hill make it obvious why the Normans established a defence here. It guarded the harbour and the town, which itself was surrounded by defensive walls. 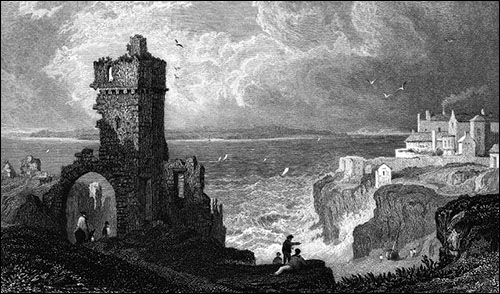 There are records of a Norman fort in Tenby in the 12th century. The stone castle was probably built in the 13th century. It was damaged by Welsh attackers in 1260 and restored for defensive use for the Parliamentarians in the Civil War in the 17th century. The opposing Royalists captured it in 1648.

The old drawing of the castle ruins c1830 is by Henry Gastineau and shown here courtesy of Llyfrgell Genedlaethol Cymru – the National Museum of Wales. Caldey Island is visible in the distance.

There were domestic buildings, associated with the castle, on the slope south of the castle. One of them was a ruin before the Victorians rebuilt it as the town’s National School. In 1878 it became the Tenby Museum & Art Gallery, Wales’ oldest independent museum.

Near the castle you can also see remnants of the defensive wall which ran between the castle and walled town – pictured on our page about Castle Beach.

On the summit of Castle Hill stands a statue of Prince Albert (1819-61), Queen Victoria’s husband and consort. The statue was unveiled in 1865 by his third son, Prince Arthur. It was made of Sicilian marble by Brecon-born sculptor John Evan Thomas. It depicts the Prince Consort in his Field Marshall’s uniform and wearing the mantle of the Order of the Garter. It stands on a large block of limestone from a quarry near Marros, a little to the north east.