Here Telford’s A5 road squeezes between the southern shore of Llyn Ogwen and the sheer north face of Tryfan. 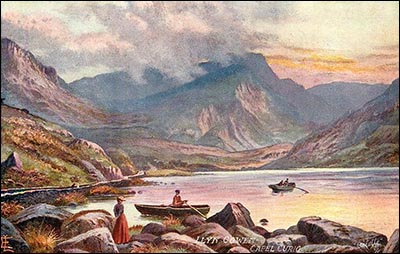 Llyn is Welsh for lake. Ogwen is also the name of the river which flows into and out of the lake, and of the valley through which the river continues northwards to the Menai Strait. The first element of the name is probably Og, Old Welsh for fast or lively. The second element derives from banw, a name found in other Welsh rivers including Aman (in Carmarthenshire) and Banw (Powys). Ogwen was written in the 15th century as ogwanw (or similar), and as Ogweyne c.1537.

The second element of Tryfan is ban, meaning peak. The first element, Try-, can be an adjective describing something extreme, in this case perhaps a “conspicuous peak”. Another possibility is that there used to be three standing stones at its summit, where now there are two – known as Adam and Eve. Tri is Welsh for three.

To hear how to pronounce Tryfan, press play: Or, download mp3 (11KB)

Some interpreters of the Arthurian legends assert that Sir Bedivere (Bedwyr in Welsh) returned King Arthur’s sword, Excalibur, to the Lady of the Lake at Llyn Ogwen after the king’s death, and that Sir Bedivere was buried on Tryfan.