This area of Holyhead is named Porth Thomas Hughes (“Thomas Hughes Port”) in honour of a seaman who saved a woman and an infant from drowning in 1853.

Thomas Hughes was born c.1814, probably in Holyhead. In 1853 he worked on the City of Dublin Steam Packet Company ship SS Eblana. He was on duty on the vessel at Holyhead when 36-year-old Mary Edwards and her three-year-old niece accidentally fell from the jetty into deep water. Thomas jumped from his vessel into the sea and managed to save both the woman and child. 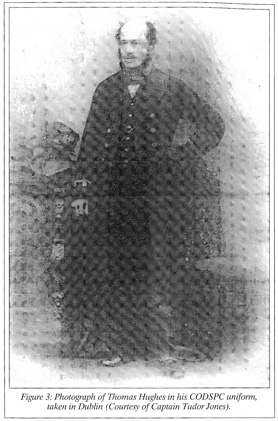 The Royal Humane Society awarded Thomas their Silver Medal in recognition of his bravery. The citation reads: “That the noble courage and humane perseverance displayed by Thomas Hughes, 3rd Mate of the City of Dublin Mail Steamer ‘Eblana’, on the 5 November 1853, in having jumped overboard to the relief of a female and a child who had fallen over the Jetty into deep water at Holyhead, and succeeded in first getting hold of the woman and bringing her to the surface and afterwards diving brought up the child himself with the assistance of another rope thrown to him, by which both lives were saved, has called forth the lively admiration of the General Court and justly entitles him to the honorary Silver Medal of this Institution which is hereby awarded.”

Not long after receiving his award, he died of heart failure on 4 January 1855, aged 40. He left a widow and three daughters. Strangely, he appears to be buried in St Cybi’s Churchyard in a grave containing the remains of Rowland Butler and his wife. Rowland Butler had died 80 years previously!

In recognition of his bravery, the name Porth Thomas Hughes was adopted for this area of Holyhead. Over the passage of time, the name was mostly forgotten and the general name “Bolsach” was more frequently used. In 2011, as part of improvement works to Newry Beach, the town council decided to erect a plaque in remembrance of Thomas Hughes and re-establish the name.

With thanks to Barry Hillier, of Holyhead Maritime Museum, and Captain Tudor Jones, a descendant of Thomas Hughes