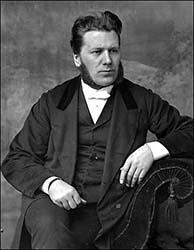 ealth centre, in a former chapel, takes the name of a village in North Wales which is best known for the National Trust’s Bodnant Garden.

So what’s the connection? The story goes back to 1840 and the birth of John Evans (pictured right) in Eglwysbach, near Conwy. He grew up on the family farm, attending Capel Ebeneser in the village. He was just 17 years old when he started preaching. Within months he was drawing big audiences to chapels. Chapel officials, expecting the celebrity preacher to be much older, often took some convincing to let the teenager through to the pulpit!

Affectionately known as “Eglwysbach”, he was minister at various times in his career at chapels in different parts of Wales and in Liverpool and London. His addresses were so powerful that his audiences sometimes entered a trance, forcing him to sit and be silent until emotions were back in check. He made two preaching tours of the USA. He is credited with converting thousands of people to Wesleyan Methodism. 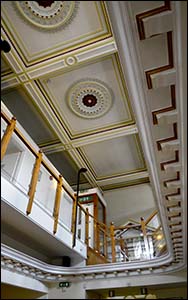 In 1893, he established a mission centred on Pontypridd for the South Wales coalfield. In 1894, he established a monthly magazine called Y Fwyell (Welsh for “the axe”), targeted at the mining communities. A newspaper described it as containing “matter of a right earnest nature which is calculated to do much good to the Pontypridd and Rhondda people, among whom … Mr Evans circulates for the most part these days”.

After his death in 1897, Wesleyan Methodists in South Wales wanted a fitting memorial to him. The result was this new chapel beside the river Taff, named Capel Goffadwriaethol Eglwysbach ("Eglwysbach memorial chapel"). The red brick finish, with corners and other details in Bath stone, conveys a sense of grandeur. The wall facing the river, invisible to the arriving congregation, was built of cheaper stone, sourced locally.

The chapel had fallen into disrepair when local GPs instigated its restoration and conversion into a medical practice, which opened in 1990. The quality of the conversion won a Prince of Wales Trust award in 1992. The consulting rooms are around the sides, beneath the gallery. The central part of the ceiling, decorated with two rose patterns, is still visible (see photo on left).

The town’s family doctors were previously concentrated in Gelliwastad Road, regarded as the Harley Street of Pontypridd! Initially, they had individual practices attached to their homes.