This market hall was built in the early 1870s to a design by Wilson & Wilcox of Bath. It included a general covered market, council chambers and offices, the original Assembly Rooms (the Borough Theatre since 1906) and a clock tower. On the first floor there was a corn exchange, where various types of grain were traded. There were “Poor Law” offices, where paupers could apply for help, near the entrance.

The frontage is in the style of a Continental town hall. There is a sad tale that while it was being completed, Thomas Watkins, aged 26 years, fell to his death working on the tower.

The large market hall roof is supported on six tall iron posts, with wrought iron rafters. Much-admired decorations hang from these and are made each year for the Abergavenny Food Festival.

The clock cost £500 and was a gift from industrialist Crawshay Bailey of Maindiff Court. Known as the “iron king”, he died in 1872, before the building was completed. This is probably why the clock’s northern face was painted black. 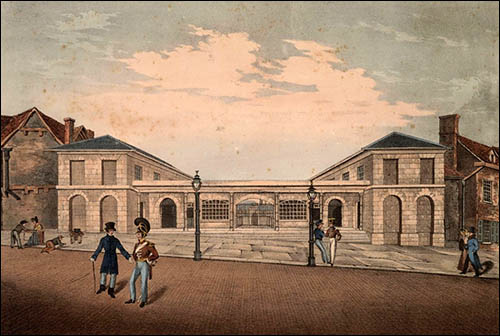 The Borough Theatre has long been a popular venue for bands, including The Beatles in the 1960s. It is open to the roof, with elaborate pine trusses with Gothic decoration and a decorated balcony front. The former corn exchange is now a rehearsal room.

Abergavenny’s first recorded market hall was funded from the 1603 will of Phillip Jones of Llanarth Court. It was a timber-framed building situated inconveniently in the middle of Cross Street where it is widest now. It was demolished by the Abergavenny Improvement Commissioners (established as the precursors of the Town Council in 1794) together with two pubs and several houses to build a market hall designed by John Nash – pictured on the right courtesy of Abergavenny Museum. The present market hall replaced Nash’s hall, on the same site.

Brewery Yard, the open market space behind the market hall, was the site of Facey’s Brewery. Carved stones by the road entrance mark its previous use.