You are here: Home » Buildings » Gwynedd » LLANBERIS » The Dolbadarn Hotel

Llanberis was described in 1805 as having two “most miserable” cottages and only two “tolerable houses” offering accommodation. Luxurious hotels soon began to appear, including this one. The old photo shows the hotel and its garden in the 1920s. 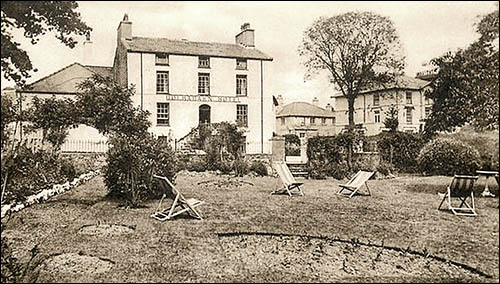 The Evans family kept the hotel in the 1830s. After William Evans’ death in 1838, his widow Mary and her son-in-law, Edward Humphreys, ran the hotel. Edward also provided tours in a coach called The Snowdonian Tourist. One tour went from Caernarfon to Llandudno via Swallow Falls, Llanrwst and Trefriw, taking over seven hours. He died in 1895, leaving the equivalent of about half a million pounds today.

In 1857 quarrymen borrowed the hotel’s harmonium (a small organ with foot-operated bellows). They carted it up to the new school in Deiniolen for a grand concert.

From the 1860s, new owner Robert Roberts advertised boats on the lakes and guides and ponies for ascending Snowdon. In 1911 the hotel had 23 bedrooms. In 1939 three brothers from Liverpool (Charles, 10, William, 8, and Frederick Black, 6) were staying here, probably as war evacuees.

In September 1846 hotel guest Rev Henry Starr, 32, curate of All Saints, Northampton, disappeared while out walking. After two weeks of receiving no letters from him, his distraught mother and sister, Emily, arrived at the hotel. More than 900 men searched the mountains but it wasn’t until nine months later that his shawl was found below Moel Cynghorion.

Edward Humphreys and two others searched the vicinity where the scarf was found and eventually discovered the “mangled remains of the unfortunate tourist”, which were taken to the Dolbadarn Hotel.

The mystery deepened. At the inquest, held here, key witnesses weren’t called and Emily Starr wasn’t allowed to present evidence she’d gathered, including the results of a medical examination of the bones. The inquest jury’s verdict was that Henry died without any foul play. Emily believed the inquest was a cover-up to protect the tourist trade.

On the 8 June 1847, Henry’s remains, borne by 12 quarrymen, were buried in Nant Peris churchyard. Mourners included Mary and Edward from the Dolbadarn Hotel. Emily wrote a book about her brother and his “remains”. Subscribers included MPs and the mathematician Lady Noel Byron (wife of the poet Lord Byron).

With thanks to Dr Hazel Pierce, of The History House. Sources include: ‘A Perilous Playground’ by Bob Maslen-Jones, Wrexham, 2004