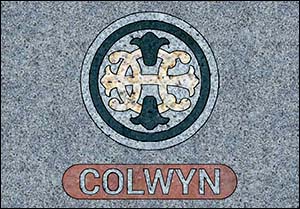 This granite postcard on the prom at Colwyn Bay shows the crest of the Chester & Holyhead Railway company, which transformed the North Wales coast’s economy. The railway continues to connect London and Chester to the ferry port at Holyhead and to serve towns along the coast. The railway sits on an embankment on the inland side of the prom.

The first passenger train from Chester to Bangor ran on 1 May 1848. There was no station at Colwyn Bay, which didn’t then exist as a town. The first station here was opened in 1849 and named Colwyn – as depicted on the granite postcard. Click here for our web page about the station.

The station triggered local property development, some of which was associated with a tourism boom. The station, which couldn’t have been closer to the sandy beach, was renamed Colwyn Bay in 1876.

As traffic along the railway continued to grow, two additional tracks were installed in 1904 (making four in total). The station received an additional island platform (with tracks on both sides) but in 1905 the local council protested that the station was unsafe on busy days in summer. The press reported in 1910 that the platforms had been lengthened – “an indication of the great development which has taken place within the last few years in the length of the trains to North Wales”.

Today the A55 uses some of the former railway land, south of the tracks.