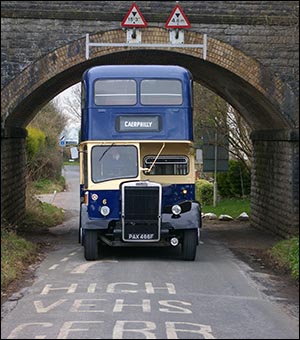 The last double decker bus to be built with a low-height body – for squeezing under low bridges – is among many historic buses kept at the former bus depot in Barry. This vehicle, a Leyland Titan PD3 with Massey body, was built in 1968 for the bus company of Bedwas & Machen Urban District Council, in the Rhymney Valley.

“Lowbridge” buses were about 30cm (1ft) lower than standard double deckers. Upstairs there were long seats for four people to sit abreast, and a gangway along the right hand side of the bus. Getting in and out of the seats was a challenge when the bus was busy, and there wasn’t enough headroom for adults to stand up straight! They could stand upright in the gangway, but only because the ceiling in the bottom deck was much lower along this side of the bus. Countless passengers bumped their heads on it when leaving their seats.

South Wales had many low bridges where railways crossed over roads, and lowbridge buses were common in Cardiff as well as the Valleys. The collection at Barry also includes a Bristol Lodekka, a lowbridge vehicle delivered new in 1958 to the Tredegar depot of bus company Red & White. 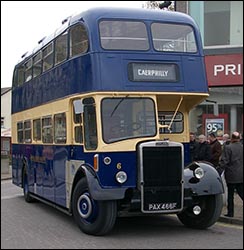 The vehicles here are owned, restored and maintained by the Cardiff Transport Preservation Group, a charity with the aim of preserving public service vehicles from South Wales. For details of events when you can visit and see some of the buses running, follow the link to the group’s website below.

The depot here was built in 1939 for the Western Welsh company, half owned by the Great Western Railway. The depot was enlarged in 1958, when it was the base for 64 buses, 110 drivers, 106 conductors (who rode on the buses to collect fares), and 47 depot-based staff. They provided services across the Vale of Glamorgan and into Cardiff.

The depot, latterly owned by National Welsh bus company, closed in 1992 and was put to various uses, including storing 10 of the last derelict steam locomotives to be saved for preservation from Woodham’s scrapyard in Barry. The CTPG and its buses moved in during 2008.