This house in Hamilton Terrace was reputedly home to Timothy Folger, captain of an American whaling ship. It was the Belhaven House Hotel for many years until 2022 and is now a private residence. Its interior still features the Georgian arch and fan-shaped window pictured below. 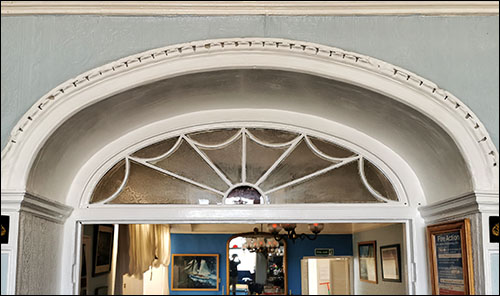 Quaker families involved in the Nantucket whaling trade were displaced during the American War of Independence in the late 18th century. They were pacifists and were harassed for refusing to take America’s side in the war. They emigrated first to Nova Scotia, Canada.

In 1791 the British authorities asked Timothy Folger and Samuel Starbuck, two of Nantucket’s leaders, to establish a whaling centre in Milford Haven. The government provided financial assistance, including pensions for Timothy and Samuel, and the first 15 families arrived in 1792. In 1797 a whale-oil warehouse – now the Milford Haven Museum – was erected at the waterside.

It’s thought that this house was built about three years later as Front Street (later renamed Hamilton Terrace) was developed for ship owners, captains and other well-off people. Middle Street (behind) was home to tradespeople such as sailmakers, chandlers and barrel makers, while sailors and whalers lived in Back Street.

The rear of this building originally housed an oven, probably for local residents to bring their dough for baking. This section may be older than the main house. Beams there still have tree bark attached.

Timothy was related to Benjamin Franklin, who was one of the main proponents of ending British rule of America and helped to draft the declaration of independence. Timothy eventually became the American Consul in Britain. He died in 1814 and is buried in Milford Haven’s Quaker burial ground.

Timothy’s wife Abiel kept a diary for several years while living in Milford Haven. Among other things, it reveals that he was a whalebone cutter in his last years. Bones from whales’ baleen plates were valuable because of their flexibility and strength. They were used for objects such as umbrella spokes, springs and – most famously – women’s corsets.

On 20 June 1810 Timothy was “giting redy to cut bone”. The following day Abiel noted: “My H [husband] cutting bone but maks a poor ham.” She wished another person could be taught to cut.

In 1809 Timothy had made blinds for the front window. She herself made wine, butter, cheese, clothes, stools, pillows and cushions, and at Christmas distributed her home-made “mince pyes”.

With thanks to Milford Haven Quakers