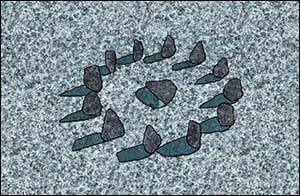 This granite postcard on the prom at Colwyn Bay depicts the stone circle which you can visit in Eirias Park. Contrary to appearances, the circle isn’t prehistoric! It was erected for ceremonies linked to the National Eisteddfod of Wales.

The Eisteddfod is held each summer in a different part of Wales, and was in Colwyn Bay in 1910 and 1947.

Poets, prose writers, musicians and artists compete at the Eisteddfod. The event also features Welsh-language entertainment and debates. About 150,000 visitors attend each year.

A stone circle in the vicinity of each year’s Eisteddfod forms the venue for ceremonies by the Gorsedd of Bards – a group of notable Welsh figures dressed in druidic robes. The Gorsedd (which means “throne”) was first convened in London in 1792 by Edward Williams, better known by his bardic name “Iolo Morgannwg”. A poet and political radical, he was addicted to a drug called laudanum. He forged documents to convince people that figments of his imagination, including the Gorsedd, stemmed from the history of ancient Celtic druids.

In 1819 he set out a miniature druidic ci

Each National Eisteddfod is ceremonially announced a year in advance. A plaque on one the maen llog (the central “logan stone”) in Eirias Park records that the 1947 Eisteddfod was “proclaimed” from the stone in June 1946.

With thanks to David Rogers Jones