The view towards Snowdon across Llyn Nantlle Uchaf (Nantlle Upper Lake) from this vicinity has attracted many artists, in particular Richard Wilson. His painting of the scene, made in the mid-1760s, is shown here. In the middle distance is the mountain pass at Drws-y-coed, which lies between Mynydd Mawr (698 metres) and Y Garn (633). 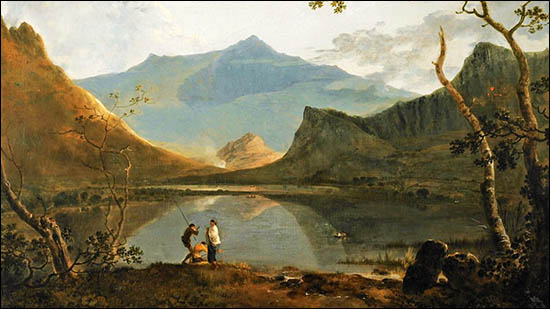 Richard (1713-1782) was born in Penegoes, near Machynlleth, and brought up in Mold, where his mother’s family was rooted. After studying painting in London, he began to paint portraits. He increasingly focused on landscape paintings while living in Italy. He returned to London in 1757, later becoming a founder of the Royal Academy. He retired to Colomendy, Mold, and is buried at St Mary’s Churchyard in Mold.

Richard’s paintings of Welsh landscapes in the 1760s made art lovers in London realise that there were places in Wales which were just as exciting for painters as anywhere else. His wealthy clients included some with Welsh ancestry. Sometimes he rearranged aspects of the landscape to convey the story he wanted to tell. His work inspired many artists – including JMW Turner and John Constable – to paint what they saw in Britain, rather than relying on mainland Europe to provide landscape subjects.

To make his picture of the view across the lake, Richard would have stood on a neck of land between two lakes. The lower lake was drained in the 1890s to help the slate quarrying industry. You can see a picture of it on our web page about Bryn Deulyn, a house named after the two lakes.

The road bridge here crosses the river Llyfni where there was once a short watercourse from the upper lake to the lower.