When Henry de Winton, archdeacon of Brecon, was appointed rector of Llandrindod Wells in 1881, he ordered the construction of a large two-storey rectory, close to Holy Trinity Church. The rectory was completed in 1884 and today it forms the front of Hotel Commodore. The section now known as the Log Cabin (on the north side) was built as a Sunday School. 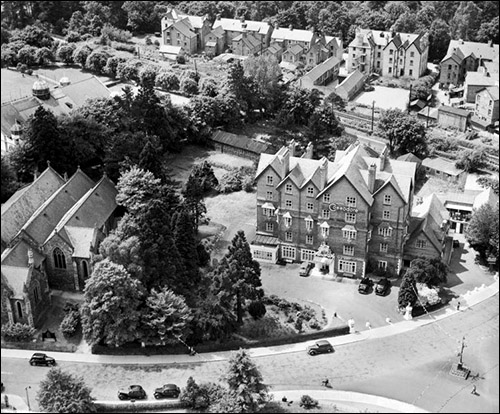 Aerial view of Hotel Commodore in 1953, courtesy of the RCAHMW and its Coflein website

The aerial photo, courtesy of the Royal Commission on the Ancient & Historical Monuments of Wales, shows the hotel in 1953, with the church on the left. It is from the Aerofilms Collection of the National Monuments Record of Wales.

Archdeacon de Winton died in Tenby in April 1895. In 1896 Dr Alfred Griffith Greenway bought the rectory and turned it into a boarding house called Plas Winton. He later had the building enlarged, with two additional storeys in the same Arts and Crafts style.

Dr Greenway, who died in 1907, was involved in Llandrindod’s development as a health spa, and in 1893 he discovered a previously unknown chalybeate spring near the town’s lake. Such springs were rich in iron salts, which were thought to be good for health. This gave the town a thriving tourist trade and the "Wells" element of its name.

In the First World War, members of the Royal Army Medical Corps (4th Army Corps) were billeted at the hotel. By February 1915 more than 3,600 RAMC troops were stationed in Llandrindod Wells, where the authorities had taken over many buildings for accommodation and training. There was even a regimental barber shop in Middleton Street!

Having helped the war effort in this way, the proprietors changed the name from Plas Winton Hotel to Hotel Commodore after the war.

Jane Sheen of the Plas Winton Hotel was taken to court in September 1916 for allowing a bright electric light to shine through one of the building’s windows after dark. The Defence of the Realm Act stipulated that “no more than a dull, subdued light” should be visible from outside any building – a precaution against feared raids by Zeppelins (German airships).

Miss Sheen’s hotel porter and gardener, Aaron Stephens, 35, was refused temporary exemption from military service in March 1916. He had argued that he was the only means of support for his widowed mother in Knighton.

Guests in later years included the King of Jordan. One of the bathrooms was remodelled to meet his requirements and remains in use today.