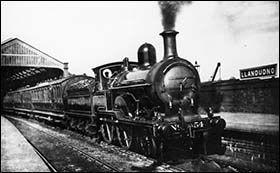 The railway branch line to Llandudno was intended to service the proposed St George’s Harbour. This scheme envisaged that Llandudno bay would be enclosed to provide a harbour for the trade to Ireland. (This was before Holyhead was developed.) Nothing came of it but the railway made the developing resort now easily and cheaply accessible to ordinary folk. Before this travellers mainly came by sea on paddle steamers or on stagecoaches.

When the first stone-built, single-storey station opened in 1858 the company was so short of locomotives that horses were frequently used to pull the carriages along the branch line from the junction with the main line. Mr Payne of the Oxford Arms supplied the dray horses but in adverse wind conditions passengers were obliged to push! 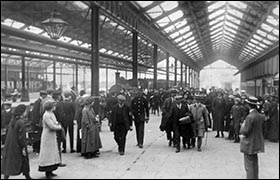 The original station only had two platforms and a modest station building in between. The present building was completed in 1892, along with a massive glass canopy. It is said that Lord Mostyn insisted on the canopy to confine the smoke from the locomotives, which he feared sully the atmosphere of the town.

The new station had five platforms where a train arrived every four minutes at peak excursion times. The cobbled road still visible today, between platforms 2 and 3, allowed Hansom cabs to line up alongside the railway carriages. There were 20 extensive sidings at the approach to the station where the trains could be parked for cleaning, coaling and watering. Near Maesdu Bridge there was a turntable so that the locomotives could be turned round for their return journeys. 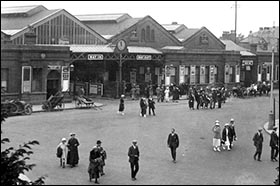 Notice the intertwined letters LM&S at the tops of the railings by the entrances to the platforms. These are relics of the London, Midland & Scottish Railway, which owned the station from 1923 to 1947.

From 1907 to 1942 a train known as the Clubman left Llandudno at 7.40am each weekday to take North Wales businessmen to work in Manchester. Members of the club had permanent seats booked, on which their regular newspaper would be waiting. Each had a locker to store his cigars or pipes and tobacco! A variety of breakfasts was served at their seats. The Clubman coaches were removed during the Second World War but the 7.40am Llandudno-Manchester train continued until 1965 and was still called the Clubman.

Most of the canopy was demolished in 1990 and most of the sidings also were removed at the same time. In 2014 Network Rail completed a £5.2m million upgrade of the station, which provided a glass frontage and a car park on what was previously platform 4 and 5. Transport for Wales Rail Services provides frequent services from Llandudno to Manchester, and several daily to Blaenau Ffestiniog.