Many ships were wrecked along the coastline of Morfa Harlech (just beyond the dunes from the QR codes for this page) including the Spanker, lost because its captain was unaware Bardsey lighthouse had changed from giving a constant light to a flashing light.

The Spanker was a barque built in Dumbarton in 1860 and registered in Glasgow. Its owner and master was R Whitehall. In the small hours of 7 February 1885, it was nearing the end of a voyage from Jamaica to Liverpool with a cargo of logwood when it ran aground at Morfa Harlech.

The Criccieth lifeboat answered the distress call swiftly, but the barque’s lights went out as the 10 oarsmen rowed towards the ship. The crew had to wait several ho 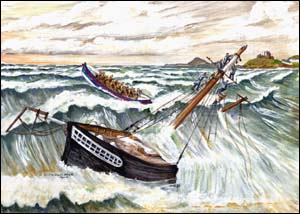 urs at sea until daylight, with no provisions (they had not wanted to delay setting off). Spray from the heavy sea continuously drenched them.

Daybreak revealed the Spanker in the breakers, with seven of the crew clinging to the rigging on a part which had separated from the main body - see the painting on the right by Robert Cadwalader. The four other members of the crew had drowned: Captain Whitehall; the steward; the boatswain; and Harris the carpenter.

The lifeboat anchor was dropped nearby and the crew slackened away on the rope to back the lifeboat through the surf to the survivors, who were taken to Criccieth. Hundreds of people gathered outside the lifeboat house as the lifeboat approached the open beach. The survivors were looked after, and a considerable amount of money was collected locally for them to buy clothing. A newspaper reported that Mr Greaves of Plas Hen, who was High Sherriff of the County, invited them to dinner on Sunday.

The Board of Trade inquiry found that the Spanker’s stranding was due to careless and improper navigation, explained by the master and the mate not being aware that the Bardsey Light had been changed from a fixed light to a revolving light. The mate, Peter Wood, was exonerated from blame.