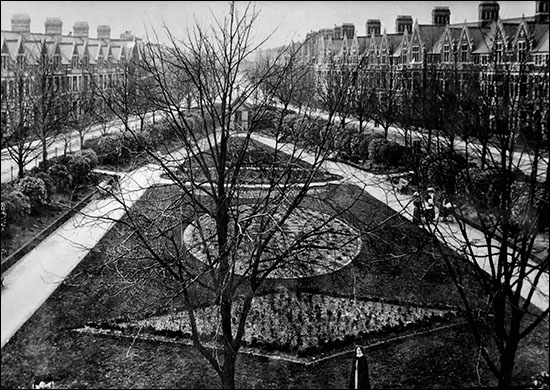 This is one of the largest of the “town square gardens” designed by the Bute Estate to complement new housing in Cardiff. Plasturton Gardens opened in 1890, soon after the estate transferred the plot of land to the Cardiff Corporation.

In the 19th century, Plas Turton was a 100-acre farm belonging to the Marquess of Bute. The farm buildings were converted to houses in the early 1880s. The farmland became streets named Plasturton Place, Plasturton Gardens and Plasturton  Avenue.

The old photo shows the gardens' early layout. The paths and flowerbeds dividing the lawned areas were requested and funded by local residents – who feared that a large expanse of grass would attract badly behaved children!

During the Second World War, a large water tank was placed at Plasturton Gardens in anticipation of Luftwaffe air raids. The fire service would have used the water from this and other tanks around Cardiff if needed.

The footways (pavements) around Plasturton Gardens and in Plasturton Avenue are mostly made of “Shamrock stone” from Ireland’s west coast, although some patches are probably of local Pennant Sandstone. Large volumes of stone were shipped to Great Britain from Liscannor in County Clare. There was even a distribution depot at Briton Ferry.

In 1892 Cardiff’s borough engineer reported that the high-quality Newbridge Pennant stone was difficult to obtain. A trial of “Liscannor stone” was agreed. See the footnotes for more on this stone.

Plasturton Gardens was chosen for filming scenes for the BBC’s 2019 drama series based Philip Pullman’s His Dark Materials. One of the characters was shown walking into a parallel universe at the gardens!

The name seems to be first recorded as Turtons Place in 1556. Later forms include Place stirton and Tiverton's Place in 1591, and Place Turton otherwise Tiverton's Place otherwise Glase-poole in 1680. The collective evidence suggests that the name refers to a house or mansion – Welsh plas and English place – probably referring to the farm which lay near Cathedral Road and extended towards Plasturton Gardens.

The remainder of the name may contain the surname Turton, though no one with this name seems to be recorded in the Llandaf-Cardiff area in that period. Historic forms such as Tiverton's Place in 1591 suggest that Turton may be a contracted form of Tiverton, probably taken from Tiverton, Devon.

There was a bridge near Plas Turton recorded as Dortons bridge in 1588. Its precise location is uncertain but it may have applied to the bridge which carried Cowbridge Road over a small stream known as Canna which ran parallel with Kings Road.

The stone is a close-grained sandstone, usually blue-grey, from the Carboniferous Period. It is often loosely described as "Millstone Grit". It is harder than granite and remains non-slip after wear, for example from people walking over it. It is characterised by the presence of squiggly fossil trails made by unidentified marine animals. Less commonly it may also contain circular burrow/worm holes and ripple marks, like those you might see on a sandy beach.