This building is unusual because it was built by a group of coal miners. Similar facilities elsewhere in the South Wales coalfield were usually built by the colliery owners, with contributions from the miners’ pay packets. 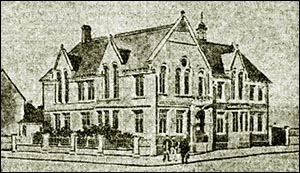 Miners from the Celynen collieries formed an association in 1898 to improve facilities for their education and recreation. The collieries’ owner allowed them to use rooms, rent-free, in the Coffee Tavern, at the top of Main Street. The miners eventually decided that larger facilities were needed, and secured a mortgage to fund construction of the Celynen Collieries Workmen’s Institute.

The building was designed by a local architect, Richard Lewis Roberts of Abercarn, and built by Charles F Morgan of Newbridge. The drawing on the right shows it around the time of its official opening, on 21 April 1908. The institute included a library, reading room, billiards room, a hall accommodating c.350 people and a separate room for officials of the Miners’ Federation.

In 1925 the adjoining Memorial Hall was opened. Together, the buildings formed a social and cultural centre for the town for many decades.

The collieries closed in the 1980s and the Institute was bankrupt by 2003, when the Friends of the Newbridge Memo was established to restore the buildings. The fund-raising effort was boosted when it featured on the BBC TV programme Restoration in 2004. The Institute reopened in 2013 after renovation funded by several bodies including the Heritage Lottery Fund, European Union and Welsh Government.