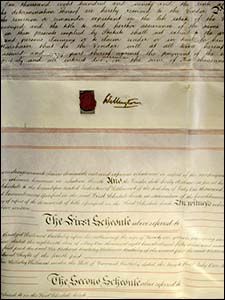 The original part of this building may have been a house initially. It has been a licensed inn since 1573. Refreshments may have been served here for centuries before that, for people who passed by on their way to or from the ferry at Tal-y-cafn.

For a long period the pub was known as the Commercial Inn, reflecting its use for business and court proceedings. When the inn changed hands in 1889, the fourth Duke of Wellington was a witness (he was grandson of the man feted for winning the Battle of Waterloo). The deeds bearing his signature are displayed at the top of the stairs (see photo).

The pub was still known as the Commercial Inn in 1908, when the Joint Hospitals Board decided to locate a new isolation hospital at Groesynyd, on a field abutting the road near the inn. However, the current name can be regarded as a reversion to Taverne-y-Groes (Welsh for “The Groes Inn”), as recorded in 1578. The building has been extended several times over the centuries, and retains a large fireplace in the north wall.

The Groes Inn continues to provide food, drink and accommodation. In 2009 the Good Pub Guide named it Britain’s “Inn of the Year”. Also in that year, local historian Stan Wicklen suggested that the Groes Inn could be the scene of Britain’s oldest Pancake Day celebrations. That day (Shrove Tuesday) is known in Welsh as Dydd Mawrth Ynyd, after the sixth-century saint whose name also features in Groesynyd (“Ynyd’s Cross"). The festivities in Wales encompassed other customs such as playing practical jokes on passers by.