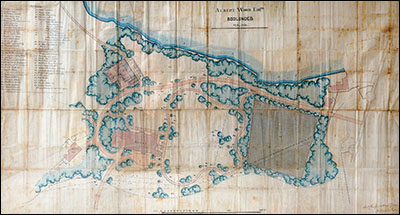 This green space, a stone’s throw from the medieval town walls, has been a public park since 1937. The grounds of Bodlondeb Hall were remodelled in the 1870s to designs by Edward Kemp, best known for his work at Birkenhead Park. At the time Bodlondeb was the Conwy home of industrialist Albert Wood, as explained on our page about the building.

Edward Kemp’s plan of the grounds is shown here courtesy of Conwy County Borough Council. It shows the site of the earlier Bodlondeb house as a garden yard surrounded by buildings for various plant types, including vines, mushrooms and melons. The dashed line shows the course of the old road from Berry Street to Pentwthill, closed to the public after Albert built Marine Walk around the estate’s periphery. 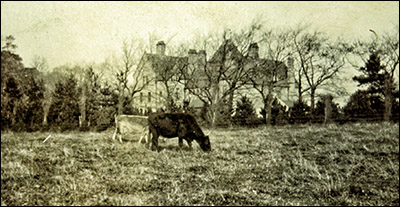 The walled garden in the south-eastern corner is now allotments, where residents grow food.

Other features included rose gardens, a camelia house and lawns “fringed with stately trees”. In front of the house were stone balustrades (still standing), beyond which was a pond with fish and waterlilies.

The western side of the estate was pasture. The old photo shows cattle grazing on what is the cricket pitch today!

In 1897 Albert’s sister-in-law Mary (also living at Bodlondeb) laid the foundation stone of a new girls’ school, on donated land in the southern corner – where Conwy Culture Centre now stands. 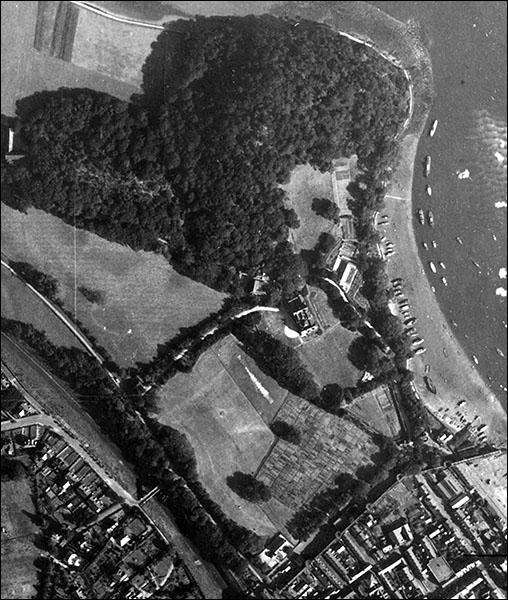 The aerial photo, courtesy of the Welsh Government, shows Bodlondeb in August 1945, three months after the war in Europe ended. Produce was being grown on a large area of the park. The woodland at the top of the photo is also part of Bodlondeb.

The park has been home to Conwy Cricket Club since the 1990s, when its previous pitch was used for the new Porth y Felin school. The North Wales Bluegrass Festival was held here each summer for 21 years, until 2016. It was here in 2018 that the Gorsedd of the Bards held the proclamation ceremony for the 2019 National Eisteddfod in Llanrwst.