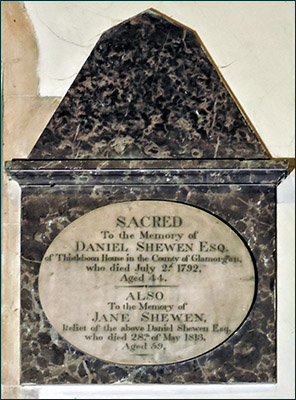 A beautiful type of stone known as Mumbles Marble was once washed in the stream which flows into the sea near here.

The stone varied in appearance. Some was grey and white, some white/yellow with liver colours (brown/red), and some was dark grey covered with yellow spots and veins.

You can see grey and white veined Mumbles Marble in All Saints’ Church, Mumbles, where it forms the background of the memorial to Daniel and Jane Shewen (shown in the upper photo). A fine example of the same stone’s use can be seen at the tomb of Thomas Mansel Talbot in Margam Abbey Church (lower photo).

Mumbles Marble was used for many other decorative objects, including chimney pieces, flooring in large houses, baths, tables and dairy slabs.

The stone was an off-shoot of limestone quarrying in the Mumbles area for buildings, lime and flux for steelworks. Suitable stone for marble production came from Colts Hill Quarry, immediately west of Oystermouth Castle, and from near Mumbles Pier. 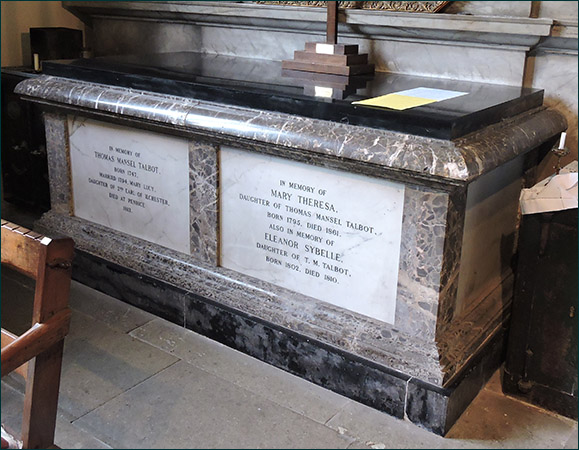 The stone was taken to a watermill, erected c.1811 just north of where the West Cross Inn stands today. Mill workers polished the pieces to bring out the decorative features.

The polished work was then washed at the mouth of what was then known as ‘Washing Lake stream’. The stream now flows in a culvert under the main road and the cycle and foot paths. It is believed the marble works at West Cross closed in 1825. The mill was demolished to make space for improvements to the Mumbles Railway.

Mumbles Marble was later processed in Swansea and known as Swansea Marble. Limestone quarrying at Mumbles continued until the Colts Hill Quarry closed in the 1960s.