Now home to Milford Haven Museum, this was probably the first large building in Milford Haven. It was used to store whale oil, brought here from across the globe by American whalers who had relocated from Nantucket island. 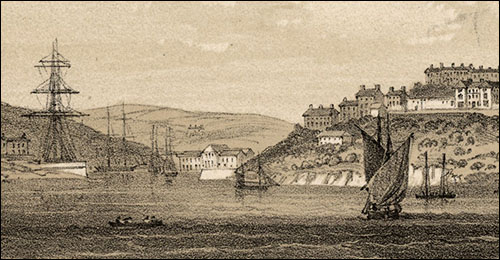 Landowner Sir William Hamilton developed the port from 1790. Little infrastructure existed when the first American Quaker families arrived in 1792. They had been shunned for their pacifism during the American War of Independence and moved to Canada. Britain offered them incentives to relocate to Pembrokeshire.

Initially they lodged in Haverfordwest. You can still see the large houses they built for themselves in Milford Haven, including the former home of ship’s captain Timothy Folger.

Their whaling trade merited construction of this large building in 1797 for secure storage of whale oil – an expensive commodity. The old drawing, part of a larger image, shows how the building (near the centre of the picture) dominated the port in its early years. The drawing is shown here courtesy of Llyfrgell Genedlaethol Cymru – the National Library of Wales.

The building was later used as a Custom House, where officers ensured duties were paid on incoming goods. In the 1870s the port was authorised to supply duty-free wines and spirits to Royal Navy and merchant ships. Henry Pattison, Milford Haven’s collector of customs from 1855 to 1887, was praised for his work to bring that status to the town. He also helped to establish lifeboats and life-saving apparatus around the Pembrokeshire coast.

Smuggling cases were heard at the Custom House, as in 1870 when the captain of a Caernarfon-registered ship was fined £5 for hiding cigars and tobacco in his cabin during a stopover on a voyage from Rotterdam to Arklow, Ireland.

Henry himself was the defendant in a court action in 1866, when his brother-in-law accused him of not paying for his own wedding breakfast! When he retired in 1887, Milford Haven was placed under the collector of customs at Llanelli.

The building was renovated before the museum moved here from the Masonic Hall. The museum has permanent exhibitions on local whaling, fishing, boat building, oil refining and social history.