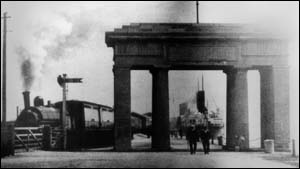 The area beyond the steel fencing is a busy part of the working ferry port, but from here you can see the George IV Arch and other features of the port’s expansion in the 1820s.

The arch was built in 1822-1824 and named to commemorate King George IV’s break of journey at Holyhead in August 1821. He arrived on the royal yacht, on which he intended to continue to Ireland. The weather remained too rough for the yacht and so, to the delight of local people, he travelled on the steam packet (forerunner of today’s ferries) which had recently been introduced to carry the Irish Mail.

The arch is also known as the Triumphal Arch or Admiralty Arch and was built with marble from Red Wharf Bay, Anglesey. It was funded through public subscription and marks the northern terminus of the A5 road, which was greatly improved by Thomas Telford. The road’s northernmost section, into Holyhead, was completed in 1823. The arch can be considered to complement London’s Marble Arch, built in 1828 and moved to its present location at the A5’s southern terminus in the 1850s. 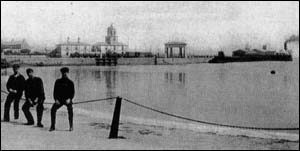 The arch was designed by Chester-based architect Thomas Harrison and added to the project which engineer John Rennie had drawn up for the port’s upgrading. Rennie wrote a report in 1802 for the “Secretary of State in Ireland” which estimated the cost of the works at £52,353, or £66,000 for “a similar plan but on a larger scale”. After years of indecision, the works were implemented in the 1820s, including the Customs House and Harbour Office which you can glimpse from here.

The new facilities were built on Salt Island, so named when edible salt was extracted from seawater there. Today the island is entirely occupied by shipping terminals, including roads and trailer parking for the Ro-ro (roll-on, roll-off) ferries to Ireland.

In December 1790, a packet (similar to a ferry) called the Charlemont, was wrecked on the north side of Salt Island with the loss of 110 lives. A gale had prevented it docking in Dublin after its voyage from Parkgate, Wirral. Scared and seasick passengers pleaded to be put ashore at Holyhead, but the captain and crew were unfamiliar with the coastline here. Only 16 people survived.

With thanks to Captain Wyn Parry