Many of the Irish people who moved to Cardiff in Victorian times settled in this area, which was known locally as Little Ireland. The residential streets here formed an extension, south of the main railway line, of the suburb of Newtown. 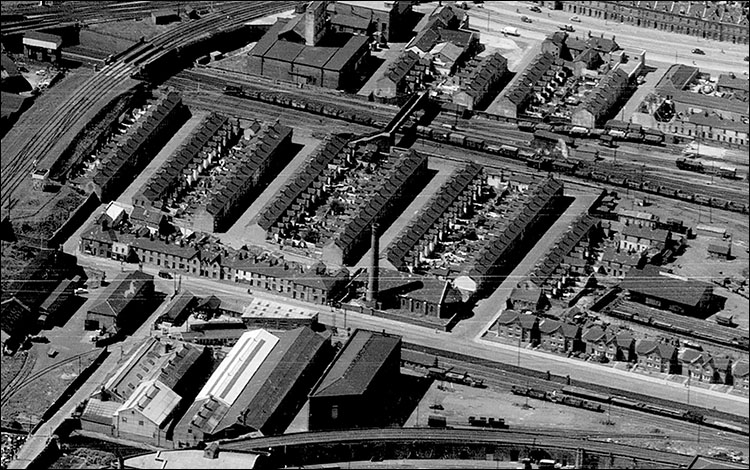 The housing was developed for workers in the nearby docks. Some of the early inhabitants were labourers on the construction of Bute East Dock. One of them was Thomas Curtain, 24, who worked as an “excavator” and lived in Ellen Street. He drowned in August 1856 after he and colleagues stopped work to go for a bathe near the dock.

The 1956 aerial photo, courtesy of the Welsh Government, shows how the neighbourhood was hemmed in by railways on all sides. Tyndall Street runs left to right, past the chimney and former church. Joining Tyndall Street by the church is Ellen Street, which still exists. 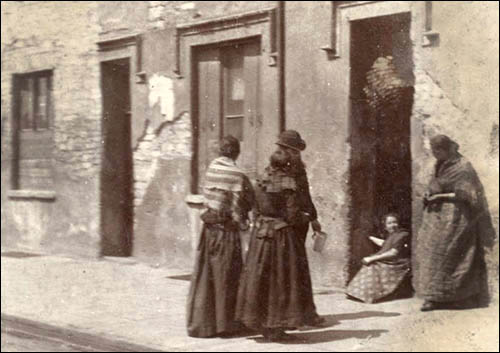 Notice the footbridge over the main railway line to the north – a forerunner of today’s Smart Bridge. To the left of Ellen Street are firstly North William Street, then Roland Street (originally Thomas Street) and Pendoylan Street, where construction work finished in 1852. The street was paved the following year.

There was overcrowding in the early years. A health inspector found 23 people living in one house in Ellen Street in 1856, and 22 in another. Initially the backyards were poorly drained. In 1853 they were found to contain stagnant surface water and a build-up of “vegetable matter” and ashes.

The photos of people in the Tyndall Street area are shown here courtesy of Cardiff Libraries. The lower one dates from c1890. 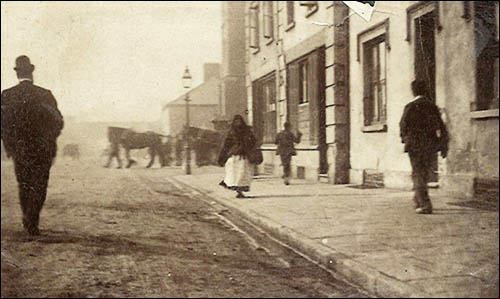 The community had its own shops and pubs. John Sullivan, of the Harp of Old Ireland pub in Ellen Street, was fined in December 1858 for selling beer on a Sunday morning. Two months later he was back in court for selling beer after hours!

Boxer Jim Driscoll (1880-1925) grew up in Ellen Street. His parents were Irish. His wedding took place in the Metropolitan Cathedral (Catholic) in 1907.

The area was considered a slum after the Second World War and the houses were demolished in the 1960s.