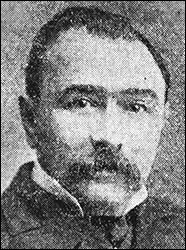 The building called Brynarlais, now home to the town council and funeral directors Morgan-Lloyd, was erected for surgeon William Bowen-Davies, whose vision and energy transformed the village of Llandrindod into a thriving spa town.

Dr Bowen-Davies (pictured right) was born in Llandigat, near Llandovery, in 1847. In 1872 he opened the first medical practice in Llandrindod, previously served by doctors in Crossgates, Rhayader or Builth. Brynarlais was built as a private house for Dr Bowen-Davies and his wife and children, probably in 1872 or soon after. The southern section (closest to the parkland and war memorial) was added c.1890.

In the early 1880s Dr Bowen-Davies sent a sample of local mineral water to Frankfurt. It was analysed and awarded a bronze medal. He soon encouraged medics across Britain to send patients to Llandrindod Wells, as the town became known. Many of the visitors went to him for consultations, some returning each year. He visited other spas to pick up ideas for the town’s development.

To ensure visitors could worship each Sunday, he would travel up to 70 miles to fetch a chaplain. He was a churchwarden for more than 30 years, and was involved in the founding of local schools. He helped set up the local cottage hospital in 1881 and became the town’s first magistrate in 1896. As a councillor, in 1902 he backed Radnorshire County Council outlawing of spitting in public places, punishable by £5 fines!

A weak heart forced him to leave his practice in 1907, soon after he helped found the local golf club. He died at his new home in Exmouth, Devon, in April 1908 and was buried at Holy Trinity Church, Llandrindod Wells.

Brynarlais became the town hall in 1910 after the urban district council bought the house and surrounding lawns. Previously the council rented various offices and stables and had no meeting rooms or safe storage for documents, while the town’s fire engine was “in danger of being ruined for lack of proper accommodation”.