Pete’s Eats occupies what were two separate shops. The one on the corner was Glasgow House, a grocery shop. The other became known as Alcan House when it sold aluminium goods. The old photo of the shops is shown here courtesy of Gareth Roberts. 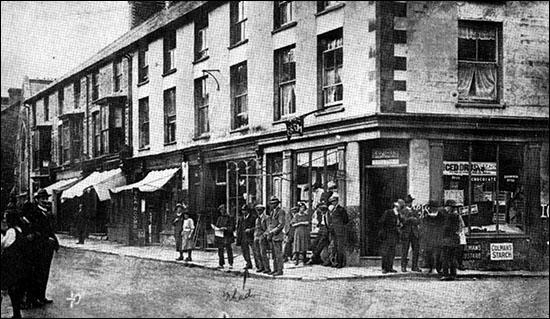 Glasgow House was one of several local ventures run by Harriet Hume in an era when men dominated business. Her father was local chemist Joseph Hobley. She married ship’s captain James Hume in 1883 and the pair owned various premises, including Glasgow House. She ran the shop during his long absences on sea voyages.

He was the first captain of a three-masted steel sailing ship named Conway. Harriet travelled to the shipyard in Dumbarton, Glasgow, to name it at the launch ceremony in 1896. James fell on hard times in 1910, when he was 57. After being out of work for eight months, he told the friends he was staying with in Liverpool that he was going for a walk. His body was later found in Canada Dock.

Harriet continued to thrive as a businesswoman. She and her daughter Margaretta ran a café and boarding house at Dol Peris in the Second World War. She died there in 1946, leaving over £740 (c.£31,000 today) to Margaretta.

Griffith Davies of Alcan House was one of the town’s special police constables during the First World War. They were volunteers who were ready to perform police duties if required. His daughter Annie qualified as a midwife in London in 1915.

Pete’s Eats was opened here in 1978 by Peter Norton. It became well known among climbers and hillwalkers. The Great Outdoors magazine named it “café of the year” in 2016.

With thanks to Dr Hazel Pierce, of The History House, and Gareth Roberts, of Menter Fachwen