This bust of Prince Charles, the Prince of Wales, was presented to St David’s Hall by the Contemporary Arts Society for Wales. It was created by Ivor Roberts-Jones (whose name is incorrectly stated as ‘Ivor Robert Jones’ on the inscription). He was born in 1913 and grew up in Oswestry, near the England-Wales border, and was regarded as one of the finest British sculptors of the 20th century. He died in 1996.

His other works include the full-length statue of Sir Winston Churchill in London’s Parliament Square. 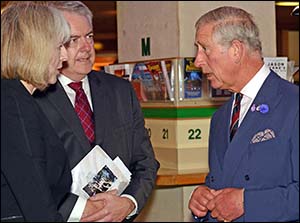 Prince Charles was born in 1948, the first child of Queen Elizabeth II and Prince Philip. He was invested as Prince of Wales at Caernarfon Castle in 1969. In preparation, he had spent a term learning to speak Welsh at the university in Aberystwyth. He married Lady Diana Spencer in 1981 and separated from her in 1992. He married Camilla Parker Bowles in 2005.

The photo shows him on one of his many visits to the Hall. This was on National Police Memorial Day in 2013. On the left is Theresa May, then the UK’s Home Secretary. She became Prime Minister in 2016. Nearer to the centre is Carwyn Jones, First Minister of Wales.

The bust sits in a niche in the Hall’s foyer (to the left of the doors). The niche was designed by architect Ivan Dale Owen, of Merthyr Tydfil. He also designed the bust of Richard Burton at the New Theatre, Cardiff.

Below the niche is the Hall’s foundation stone. It was laid by Prince Charles on 21 July 1979 in the presence of the Lord Mayor, Councillor Bella Brown, and other dignitaries.