The houses and business units at the corner of Gower Road and Station Road occupy the site of the Llanrwst Union workhouse. Poor people lived there and worked to help with their upkeep.

The Union was founded in the 1830s as a grouping of parishes which previously worked separately to help the poor. It covered the Llanrwst and Pentrefoelas districts. The latter included Trefriw, Dolwyddelan and Penmachno. A Board of Guardians supervised – pictured here in 1938 courtesy of Conwy Archives Service. 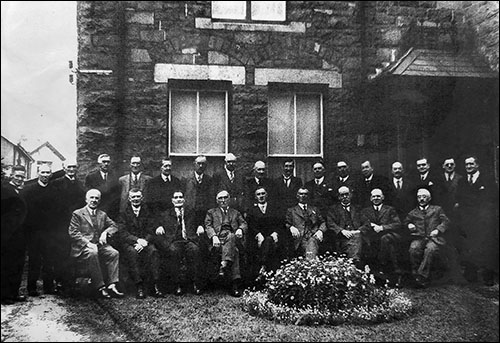 In April 1846 tenders were invited for construction of a workhouse “near to the town of Llanrwst”. It wasn’t until the opening of the railway as far as Llanrwst in 1863 that this area became built-up.

The workhouse had male and female wings. Typically there were between 30 and 50 inmates at a time. Running costs in 1906-07 were £406, offset by £28 from relatives’ contributions and revenue from inmates’ work (e.g. cutting firewood).

The workhouse’s infirmary often treated non-inmates, including men injured in quarries. Its medical officer, Dr William Harrop Parry, had to pay “pretty Irish barmaid” Frances Hanrahan £300 for breach of promise in 1905, after a trial at the High Court in Dublin heard that he’d met her on a ferry from Holyhead and promised to marry her. At his trial, his wife Adelaide said he would use her jewellery to fund his drinking bouts.

The workhouse had a school for child inmates, who were often victims of neglect or paternal desertion. In 1910, for example, the five children (aged two to 10 years) of Owen and Jane Evans of Glanrhyd came to the workhouse after NSPCC inspectors noted they had matted hair and vermin swarming over their bodies. Their house was filthy. Owen was said to be too lazy to accept work offered to him. He and Jane went to jail for two months.

Hugh and Ceridwen Jones moved from Southampton workhouse to run Llanrwst workhouse in 1937. Their son Tudur was born in their flat here in 1939. In 2002 he recalled (in an interview you can listen to at the Conwy archives) that his mother replaced the workhouse uniforms with better clothes, and installed partitions between the beds. He recalled a “cell” in the workhouse with a barred window, where in earlier times vagrants were ordered to break stones and push the pieces between the bars to form a pile outside.

Evacuee children lived at the workhouse during the Second World War, after which it briefly housed dislocated Polish and Hungarian citizens. It became a care home for the elderly before demolition in 1964.

Inmate Abel Jones (‘Y Bardd Crwst’) was born in Llanrwst in 1829 and died at the workhouse in 1901 after spending much of his life wandering around Wales as a writer and performer of ballads, some criticising the workhouse system. The Llanrwst guardians formally thanked his brother Hugh for bearing Abel’s funeral expenses.

Around 1900 Gwen Ellen Jones adopted a baby named Gwladys who was reportedly born in Llanrwst workhouse but abandoned by her birth mother. Gwen was murdered on Christmas Day 1909 by William Murphy, who became the last man hanged at Caernarfon – you can read her story here.

In 1906 Thomas John Thomas and his wife were appointed master and matron. Just a year later they moved to Wrexham workhouse but by then he had made his mark as a “terror to those tramps who frequent the vale of Conway”. Vagrants were regarded as nuisances for workhouses.