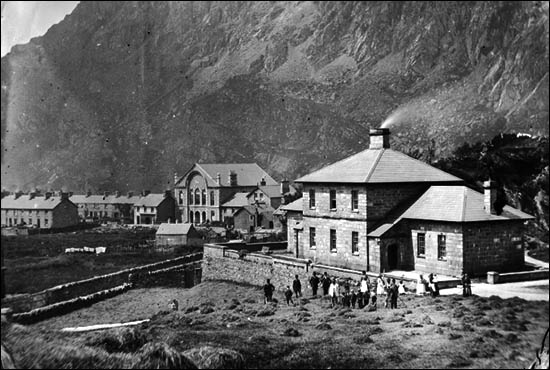 The building on the rock outcrop here was originally a quarry hospital, opened in 1848. It’s now part of the Tyn y Coed holiday park. The photo by John Thomas depicts the hospital c.1875 and is shown here courtesy of Llyfrgell Genedlaethol Cymru – the National Library of Wales.

The hospital was founded by Louisa Oakeley of Plas Tan y Bwlch after her husband’s death. Her family was a main local landowner, commemorated by the name of the Oakeley Arms Hotel. She paid for the hospital’s construction and gave £100 a year towards its running costs. It included two wards, 15 beds (later reduced to 12), a surgery and eventually a smoking room for patients.

Initially the hospital was open to quarrymen and their families from the four main quarries in this area of Blaenau Ffestiniog, three of which later became the Oakeley quarries. One of the company’s slate splitters is pictured below.

Quarrymen contributed from their pay packets. All other local quarries were later invited to subscribe but few did. Some quarry owners preferred to pay fees whenever an employee needed hospital treatment. At least one patient was treated in poor surroundings at home because the quarry agent refused to pay hospital fees. 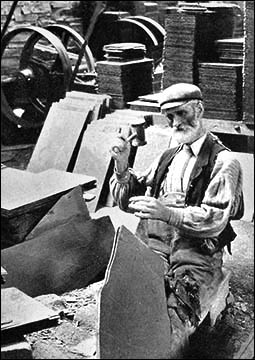 The land below the hospital was a bog. Damp was a problem in the building. Overcrowding led to one of the hospital’s surgeons, Dr Robert Roberts, building a house and surgery named Isallt in the main street in the 1880s.

Many hospital patients had been injured while quarrying. One example was Evan Evans of Tanygrisiau, admitted in 1900 after a blasting accident which destroyed one eye and damaged the other, as well as injuring both arms and hands. The hospital treated wives and other family members and even tourists, such as Liverpool clerk Henry Turtle, injured in a cycling accident near Roman Bridge in 1919.

The hospital treated many people for infectious diseases, including typhus and smallpox. The hospital had a good record in preventing transmission.

The quarry hospital closed in 1929, having been replaced by the town’s memorial hospital in 1925. In its last years, one of the wards was a club for Oakeley quarry staff. The memorial to the company’s quarrymen who died in the First World War is near the hospital.

In the 1980s the hospital building was the Tyn y Coed Tearooms, encircled by a miniature railway which took visitors on a tour of the grounds.