Press 'Play' to hear how to pronounce Beddgelert.

This narrow-gauge station opened in 1923 after some false starts. Today it’s one of the main stops on the steam-operated Welsh Highland Railway between Porthmadog and Caernarfon. 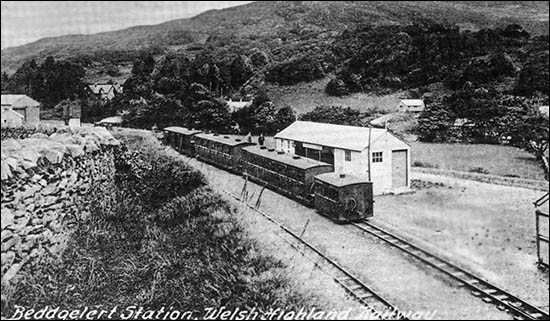 The name Beddgelert denotes the grave of Celert, a man who lived long ago. By the 18th century the name Gelert was associated with the dog in an old legend, as promoted by the owner of the Goat Hotel to early tourists.

In the early 20th century, two railway companies had Beddgelert and its tourism trade in their sights. The North Wales Narrow Gauge Railway already operated south of Caernarfon and wanted to extend to a station near the site of today’s station. The Portmadoc, Beddgelert & South Snowdon Railway planned a new line for electric trains which would have skirted the eastern end of Beddgelert and continued to a quarry in the Gwynant Valley.

To connect the railways, construction began on an embankment across the river meadows but was soon stopped. You can see the abutments of an incomplete bridge in a field south of Beddgelert. 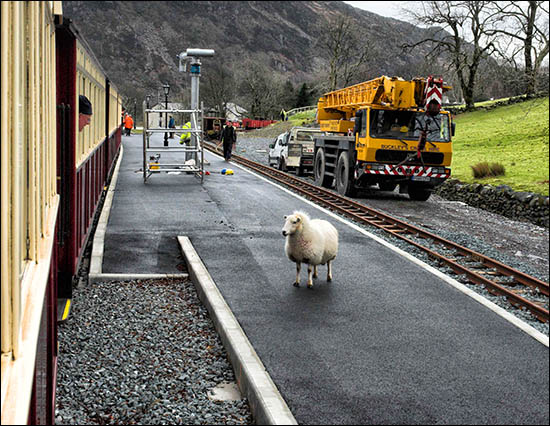 The original WHR adapted the plans of the earlier companies and engineered a different route into the station from the south, via a tunnel behind the Royal Goat Hotel. The railway towards Caernarfon also required relatively complex engineering – trains loop through a tight S-bend west of Beddgelert station in order to gain height gradually.

The WHR wasn’t a success and was insolvent within four years of opening. The Ffestiniog Railway leased the line and operated trains on it until 1937.

Beddgelert station reopened in 2009 as part of the rebuilding of the entire WHR line, on which the trains are much longer than in the past. The station platform you see today is longer than the original. The colour photo shows a test train at the incomplete station in 2008. New flowerbeds on the platform were soon abandoned after local sheep discovered the tasty flowers!