This alley leads to a street which has been known as Salubrious Place for centuries. “Salubrious” means pleasant or luxurious, but here it may have been used ironically to describe a feature with the opposite qualities! 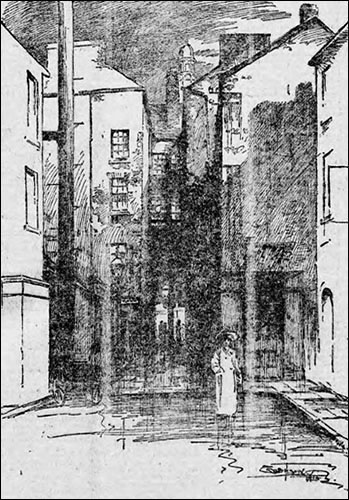 Colonel William Llewelyn Morgan (a Swansea historian of the late 19th century and early 20th) suggested that the town ditch outside the medieval walls passed through this vicinity. He suggested that the ditch, originally part of the defences, eventually became a convenient tip for waste. However, not all historians agree.

An alternative explanation of the name relates to the proximity of Swansea’s beach, which was only 200 yards (c.200 metres) from Salubrious Passage according to an 1804 advertisement for rooms in the building that stands over the passage’s entrance. After leaving the bustle and grime of Wind Street, bathers and strollers heading for the dunes might have found this thoroughfare salubrious.

Salubrious Place and Passage were narrow, almost straight and flanked continuously by buildings in the 19th century. Arches through buildings marked both ends. The old drawing shows the passage c.1919.

In the 1950s, Dylan Thomas paid homage to Salubrious Passage in a short story which mentions a “Paradise Alley”.

If you’ve just scanned the QR codes in the window of the Lighthouse Clinic, look up to see the buiding’s whimsical sculptures. They were installed by bookseller Jeff Towns when his Dylan’s Bookstore traded here from the mid-1970s to 2000.

The shop began in little more than a hut. Mr Towns commissioned local architect Brendan Minney to design a larger building with a corner tower, which is topped with a cherub. Made by artist Rob Conybeare, the cherub holds a pen and quill. Steel ribbons connect it to book sculptures, on which are inscribed the opening words of Dylan Thomas’ poem Fern Hill. A monumental mason supplied the book sculptures, which were originally intended to depict Bibles at graves!

With thanks to Dr Edith Evans and Jeff Towns, and to the Lighthouse Clinic for hosting the QR codes