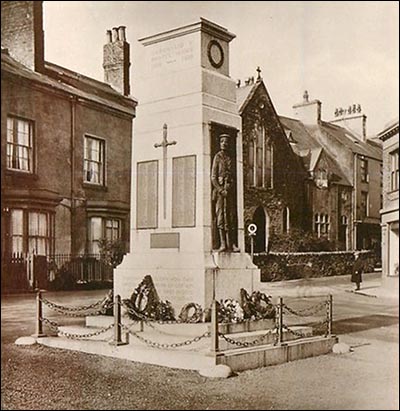 This cenotaph was unveiled in September 1923 to commemorate the local men who died in the First World War. The dedication records that it was erected by the inhabitants of Holyhead. Names of the fallen from later conflicts were added subsequently. To read details of the war dead, choose a category below.

The First World War names are categorised by service here, as on the cenotaph. The names under Rhoscolyn Rural on the memorial are at the end of our FWW Army list. The individual ships named on the memorial are under our FWW Mercantile Marine heading.

Among those named on the memorial is John Fox Russell, of the Royal Army Medical Corps, who was awarded the Victoria Cross – the highest possible decoration for valour – for his actions to help the wounded during fighting in Palestine. His family lived in the building which is close to the cenotaph (now the offices of TR Evans, Hughes & Co). This was built c.1770 and was the Eagle and Child Inn, later the Royal Hotel.

We are grateful to local historian Barry Hillier for allowing us to draw on his First World War research. You can read more details about those who fell on his website.

With thanks to TR Evans, Hughes & Co for hosting the QR codes in their window near the cenotaph