Beside the Wales Coast Path here are the remains of Tŷ Tan yr Allt, the clifftop house which the great bard Cynan described in one of his most famous poems.

To listen to the poem read by Professor Gerwyn Wiliams, press play:

Cynan was born in 1895 and grew up in Pwllheli, as you can read on our page about his birthplace. When he wrote his celebrated poem Aberdaron in the 1920s, Tŷ Tan yr Allt was home to two women, one of them being a dressmaker. 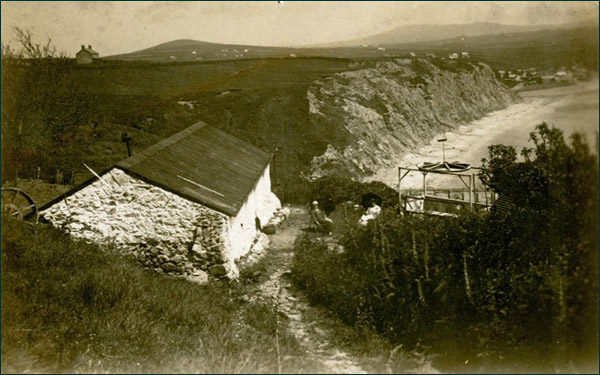 Cynan’s papers include a picture postcard – shown here – of Tŷ Tan yr Allt with Cynan’s own handwriting on the reverse explaining that this is the lonely house to which he referred in Aberdaron.

The poem has four verses, often condensed into two. It describes the poet’s desire to retire eventually to an isolated cottage with nothing in front of it but the sea and the rocks of Aberdaron. He imagines how living there will rekindle emotions he felt in his youth. The poem has been set to music multiple times and is perhaps usually interpreted as an expression of hiraeth (longing for home).

However, Cynan conceived the poem as a satirical attack on an older bard who had criticised him and other young poets in a newspaper article in 1923. It’s thought that Cynan happened to be in Aberdaron when he read the article. The poem’s first three verses open with the line “Pan fwyf yn hen a pharchus” – “When I am old and respectable” – and associate that with having plenty of money and blood which runs cold and being beyond criticism. 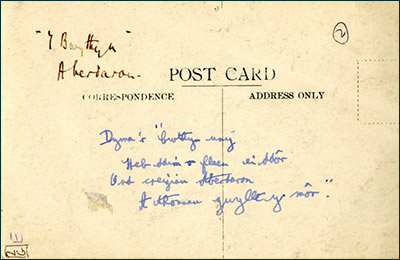 The house was still inhabited after the Second World War. In 2020 Aberdaron resident Mary Roberts recalled being invited to afternoon tea with schoolteacher Nela Evans at Tŷ Tan yr Allt in the late 1940s. The refreshments included sandwiches of tomato with sugar!

Later in life, Cynan is reputed to have remarked that he had wanted to buy the house but had limited means as a Methodist minister and was outbid by a wealthy English industrialist. The ruins and the land here now belong to the National Trust.

In the old postcard you can glimpse the pier (in the middle distance on the right) built across Aberdaron beach for the nearby barytes mine.

With thanks to Prof Gerwyn Wiliams, of Bangor University, Glenys Jones and Sioned O’Connor