This building was a confectionery shop and lodging house when the children’s writer Roald Dahl lived in Llandaff as a child. According to his autobiography, he bought sweets here and once played a trick on the shopkeeper. 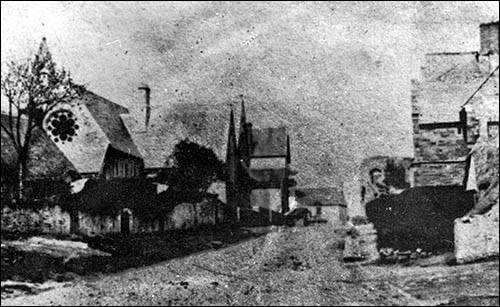 Catherine Morgan lived her for many decades and established a confectioner’s shop on the ground floor between 1891 and 1901. The old photo – courtesy of Cardiff Libraries – shows the upper end of High Street in the late 19th century when there was a school (visible on the left) opposite the shop.

Catherine was born in Bridgend c.1850 and was a widow by 1891. In 1911 she was living here with her grown-up daughters Sarah and Kate, both unmarried. There were also four male lodgers. Catherine and her daughters were still living here in 1939, along with an unemployed lodger.

Roald was born in 1916 to Norwegian parents and christened in Cardiff’s Norwegian church. His father Harald was co-owner of a Cardiff shipbroking company (arranging ships for cargoes). Roald attended Llandaff Cathedral School. When they had pocket money, he and four schoolmates would buy sweets here.

In his autobiography Boy, he changed the shopkeeper’s name to Mrs Pratchett. He recalled that she was mean and unclean, and would remove sweets from the jars with filthy hands. One day he and his mates conspired to place a dead mouse in a jar of gobstoppers (large round sweets) while her back was turned.

All of the school’s pupils were lined up the next day and the shopkeeper successfully identified  the five boys for punishment. The headmaster struck their backsides with a cane, four times each, while the shopkeeper watched and encouraged him to strike harder. When Roald’s mother Sofie saw his welts at bath-time, she went to complain but the headmaster was unrepentant. As a result, she moved Roald to a boarding school in England.

Roald died in 1990. His many children’s books include Charlie and the Chocolate Factory. The blue plaque on the wall here was unveiled by his son Theo in 2009.

The shop became a take-away food outlet before the building was converted to self-catering guest accommodation known as the Sweet shop.