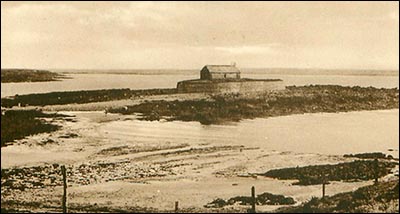 This medieval church stands on a tiny island of its own and is inaccessible at high tide. Centuries of waves and storms have eroded most of the promontory on which the church was originally built. The church has survived because a strong circular retaining wall was built around the churchyard.

Part of the present church (the south wall around the door) dates from the 12th century. The east and west walls were rebuilt in the 14th century, when the building was probably extended in length.

A second aisle had been added by the late 15th century, on the north side of the surviving building. Access to it was through the north wall, most of which was removed after three sandstone arches had been inserted to support the roof. The second aisle was demolished in the early 19th century, perhaps because of erosion problems. The outlines of the three arches are still visible in the north wall.

A new church was opened inland in 1872, at a more convenient location for worshippers. Services are still held at St Cwyfan’s occasionally. 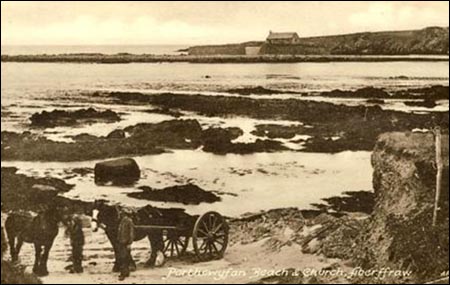 The church is usually locked, but you can appreciate the windows and 15th-century doorway as you walk around the building’s exterior. The central window in the north wall dates from the 14th or early 15th century, and was re-set there after the second aisle’s demolition. The east window (facing inland) is also from the 14th century but has been much altered.

The church was re-pointed and limewashed in 2006-07, giving archaeologists an opportunity to discover more about the building’s construction.

In the churchyard are several graves from the 18th and 19th centuries. One is that of Frank Morley Gurney of London. He drowned, aged 21, on 31 July 1869 after volunteering to save “papers of value” from the barque Dalton. A gale had driven the ship ashore at Porth Trecastell, the next inlet to the north of St Cwyfan’s Church.