You are here: Home » Buildings » Monmouthshire » Usk: The Priory Church of St Mary

This building was once part of a Benedictine priory, founded in the 12th century by Richard de Clare. The original nave and tower survive. The north aisle was added in the 13th century. 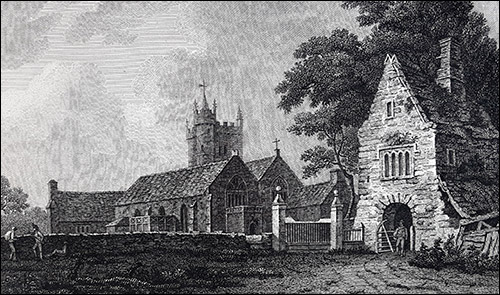 The engraving of the church was included in an 1804 edition of Gerald of Wales’ 1188 itinerary by Richard Colt Hoare. It is from an original in the St Davids Cathedral Library, reproduced with permission of the Dean and Chapter of St Davids Cathedral.

Parishioners worshipped at the west end of the nave, separated by a screen (see upper photo) from the main priory church, which extended east and west of the tower.

The cloisters used by the nuns were south of the church. The house which stands in that area now probably incorporates parts of the Prioress’s Lodging. 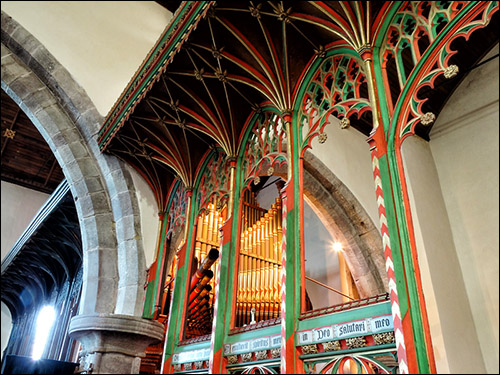 Priory buildings east of the tower (where there’s now a Garden of Remembrance) suffered from unstable foundations. The Romans had dug a defensive ditch in the same area. Some of the buildings may have disappeared before King Henry VIII ordered the dissolution of monasteries in 1536. Just a year earlier, a new gatehouse had been erected for the priory – it’s the house on the corner beside the churchyard entrance on Priory Street.

The priory’s finances were also unstable, until a Papal Indulgence was obtained in 1404 by Adam of Usk (1352-1430), a lawyer, priest and chronicler. This made the priory a place of pilgrimage, where visitors paid for indulgence of their sins in the expectation that, after death, their time in purgatory would be shortened. Adam is remembered by a brass plaque in the church. He was buried by the priory’s high altar (located where the east wall of the Garden of Remembrance now stands).

The church’s two porches (see lower photo) were probably funded by Sir William Herbert (d.1469). You can see his family’s portcullis emblem on the north porch. The Yorkist King Edward IV made him Lord Herbert of Raglan and Earl of Pembroke. Sir William took custody of Henry Tudor, the Lancastrian heir to the throne who consequently grew up alongside his own children at Raglan Castle. Sir William intended Henry to marry his daughter Maud, but in 1486 Henry – having been crowned King Henry VII –  married Elizabeth of York, daughter of Edward IV. 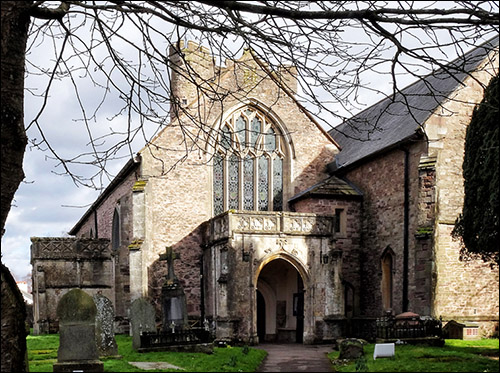 Near the main entrance is a slab laid in 1994 in memory of St David Lewis, who conducted illegal Catholic services in various places, such as the attic of the Gunter mansion in his native Abergavenny. He was hanged, drawn and quartered in Usk in 1679 and buried outside St Mary’s Church, despite the law prohibiting martyrs’ burial in church grounds.

Inside the church are a magnificent carved screen, across the church’s full width, and a 12th-century font. The church organ was built by Grave & Davison for Llandaff Cathedral and moved here in 1900. Some of its pipes are horizontal, projecting sound directly towards the congregation. It was restored to its 1900 condition in 2006.

With thanks to Usk Civic Society for information from the late Geoffrey Mein, and to Jon Prince for the photos