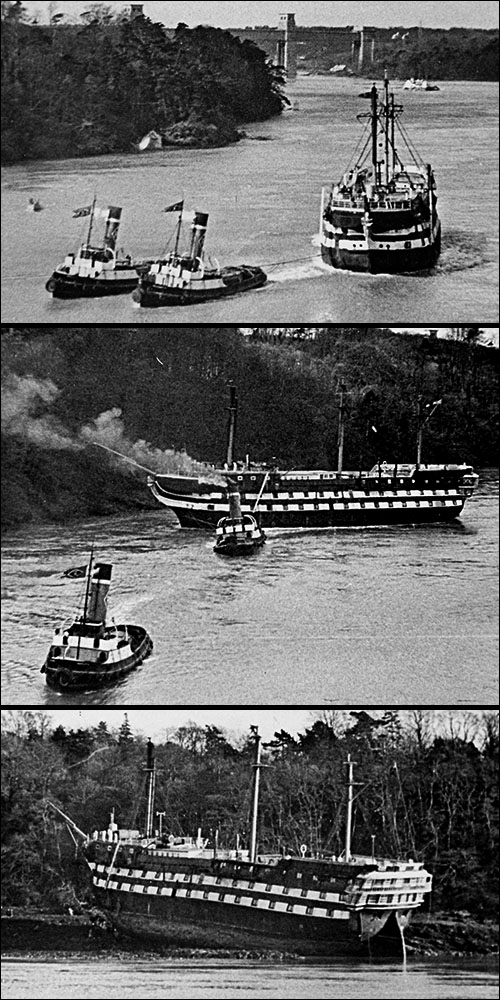 An ancient warship was written off in 1953 after it ran aground below this point on the Wales Coast Path.

The ship was launched in 1839 as HMS Nile. After decades of active service, mainly around the North Atlantic, it was moored at Rock Ferry, near Liverpool, as the new home of the HMS Conway naval training school. The school was founded in 1859.

The ship was towed to a mooring in the Menai Strait in May 1941. The Luftwaffe was repeatedly bombing Merseyside, and there was a risk of losing HMS Conway at a time of increased demand for naval trainees. You can imagine the effect a bomb or incendiary device would have had on the wooden ship!

In 1953 the ship was booked in for a refit at Birkenhead. Two tugs (rather than the three suggested by local pilots) began to tow it from the mooring near Plas Newydd but were unable to control the heavy vessel amid the strong currents of Pwll Ceris (or the Swillies).

The picture sequence is from the collection of the late James Roberts. The middle photo shows HMS Conway’s last moments afloat after 114 years, while one of the tugs strains every sinew to keep the ship from the rocks.

The ship couldn’t be refloated and was declared a total loss. Work on dismantling the hulk began in 1956 but a fire soon destroyed most of the remaining wood.

HMS Conway continued as a shore-based training school at Plas Newydd until 1974. One of the last trainees there was Clive Woodward, later knighted after coaching the England rugby team to victory in the 2003 Rugby World Cup.