The area outside the Little Theatre produced the most exciting television footage of the 2001 general election campaign when the Deputy Prime Minister, John Prescott, was involved in a fracas with a protestor here.

Mr Prescott, who became Lord Prescott in 2010, was born in Prestatyn in 1938 and moved with his family to Yorkshire when he was five years old. While sitting as Labour MP for Hull East, he was elected deputy leader of the Labour Party in 1994. Prime Minister Tony Blair appointed him Deputy Prime Minister when Labour took office in 1997. He held that post for 10 years, longer than any predecessor. 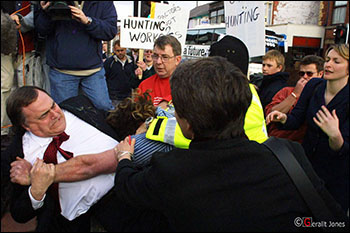 On the evening of 16 May 2001 he stepped off his “Prescott Express” bus with his entourage and walked towards the Little Theatre, where he was due to give a speech about the party’s new election manifesto. A crowd of protestors, unhappy with the Government’s handling of rural affairs, lined the pavement. One protestor, a 29-year-old man, accurately threw an egg at Mr Prescott from short range.

The politician responded with a left jab and the men were locked in a brief struggle, during which Mr Prescott was pushed backwards onto the low wall in front of the theatre. The incident, captured by TV and press cameras, made sensational news. The photo on the right is reproduced by kind permission of press photographer Gerallt Jones.

Police handcuffed the protestor and took him to the police station. No legal action was taken against him. Mr Prescott delivered his speech in the theatre, and was later interviewed and cautioned by police. Labour won the election with a majority of 166 seats.

Lord Prescott returned to the Little Theatre in 2013 and posed for press cameras with a chocolate egg.

The Little Theatre, which opened in 1963, is the first theatre in the UK built specifically for children.

With thanks to Gerallt Jones