Outside St Mary’s Church stands a memorial to people who died during construction of the Britannia Bridge, Robert Stephenson’s tubular railway bridge over the Menai Strait. See below for their names and details. The memorial also bears the names of two men who died in the bridge’s rebuilding in the 1970s (details below). 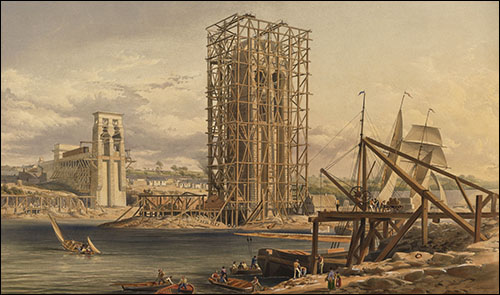 We have included details of Robert Jones, who is not named on the memorial although he died after falling from scaffolding at the Anglesey end of the bridge, where the ‘cathedral abutment’ was under construction. Some of the men who died were sailors, who had useful skills in handling ropes and scaling ladders.

Inscriptions state that the memorial is sacred to the memory of two Yorkshiremen. One was William Brooks (“Brook” on the memorial) of Dewsbury, who died of typhus fever on 11 October 1847, aged 26 (27 on the memorial). He had been principal accountant to the contractors for the bridge masonry. The other was brick maker Isaac Garforth of Mirfield, who died on 18 March 1850, aged 62

Construction of the Britannia Bridge from 1846 to 1850 involved a large labour force. Many of the workmen lived near the site in a community – on both sides of the Strait – known as Britannia Bridge, often with their families. Numerous adults and children died of disease during the construction project. In 1849 the settlement was described as “extremely filthy” by the Bangor and Beaumaris Board of Guardians, which was concerned about potential outbreaks of cholera and other diseases.

Several marriages also took place at Britannia Bridge, and children were born there. Two children are named on the memorial. One of them had been playing on a temporary railway when he was hit by a vehicle carrying stone. Many other children died at Britannia Bridge. The death toll in just one week in 1849 was as follows: Sarah Anne Bentley, aged 7 months, died of whooping cough on 20 March; Thomas Fleet, aged 10 weeks, died of “convulsions” on 22 March; and Elizabeth Anne Thomas, aged 30 months, died of whooping cough on 23 March.

A bridge worker called Hodgkinson had his baby daughter christened Britannia Ann Stephenson Hodgkinson in 1849. The ceremony took place in the middle of the Menai Strait at the Britannia Rock, on which the bridge’s central pier stands.

In 1848 coroner William Jones held an inquest on night watchman John Rowlands, aged 30, who was murdered while patrolling the bridge worksite on 28 July. His fellow watchman John Pritchard was tried for his murder in 1849 and acquitted.

With thanks to Gerwyn James and to the Royal Collection Trust