This memorial was erected in 2012 to honour Raymond Victor Steed, one the youngest British people to die in service in the Second World War. He was 14 years old when he was killed by an explosion. A poem on the back of the memorial stone refers to the boy sailors – more than 500 in total – who were under 16 when they died in service with the Royal Navy or Merchant Navy during the war. 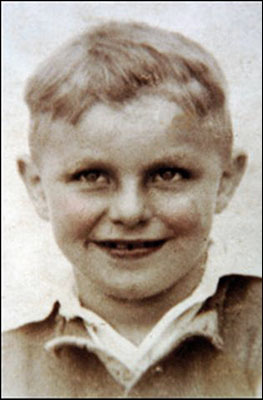 Raymond Steed was born in 1928 in Malpas, Newport, to Wilfred and Olive Steed. He joined the Merchant Navy Reserve Pool (MNRP) on 29 December 1942, two months after his 14th birthday. On the same day, he started work as a steward’s boy on a hospital ship docked at Newport.

In April 1943 he transferred to the SS Empire Morn. This was a Catapult Aircraft Merchantman, a cargo ship carrying a fighter plane which could launch from its deck (but couldn’t land there). It left Milford Haven with a cargo of military equipment for Casablanca and Gibraltar, later joining a southbound convoy which had started from Liverpool.

On the evening of 26 April the Empire Morn struck a German mine. The explosion caused the ship’s magazine (ammunition storage area) to explode. Most of the crew accommodation was wrecked. The surviving crew members abandoned ship for the night. Some reboarded in the morning and the ship was towed to Casablanca.

Raymond’s body was found in the ship’s damaged area on 28 April, along with that of 18-year-old John Gardner. They were buried at Ben M’sik European Cemetery, near Casablanca. The bodies of 19 other crew members who died were never found.

With thanks to Billy McGee and Shaun McGuire