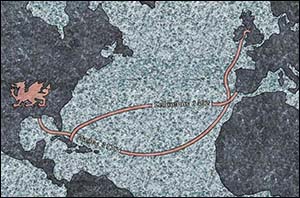 This granite postcard on the prom at Colwyn Bay depicts the trans-Atlantic journey which, according to legend, was made by Prince Madog in 1170, starting from what’s now known as Rhos-on-Sea.

Madog is said to have been a son of ruler Madog ab Owain Gwynedd. Fed up with political machinations in Wales, he assembled a group of people to found a colony on the far side of the Atlantic. Some historians suggest that the transport arrangements were handled by Vikings – experts at long-distance navigation.

Madog is said to have landed at Alabama or Florida and to have returned eventually to Wales to take further settlers, men and women, to America. He was never seen or heard of after his second departure.

The other line on the granite postcard depicts the journey of Italian sailor and navigator Christopher Columbus, who is often credited with “discovering” America in 1492. However, Leif Erikson of Iceland probably got there 500 years before Columbus, and another legend tells of St Brendan, an Irish monk, travelling to America and back to Ireland in the 6th century.

Click here to see our web page and map relating to the site of Prince Madog’s reputed departure in 1170.