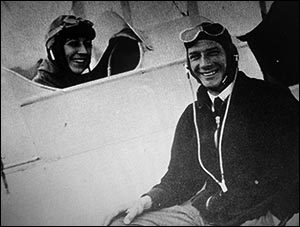 Valentine Baker, a First World War flying ace, attended this school. Unusually he served in all three armed services during the war. After the war he trained Amy Johnson (pictured right with Val) and others. He was killed while testing a new aircraft during the Second World War.

The original school building was erected here as a National School (linked to the Anglican church) in 1857, on farmland belonging to the Plas estate. The headmaster’s house and infants’ section were added in 1871, and the girls’ classrooms in 1883.

Val Baker’s father moved to the area to be the schoolmaster in Abergwyngregyn. He was persuaded by Henry Platt of Gorddinog, whose family fortune came from cotton-weaving machines, to become his manager at the Bryn y Neuadd estate – a huge rise in status

Val grew up with Henry’s son Sydney, who was the same age. Val joined the Royal Navy at the outbreak of the First World War and was a dispatch rider with the Armoured Cars Section. By October 1914 he was promoted to Petty Officer. He was shot in the neck during the ill-fated Gallipoli campaign in Turkey in 1915.

He was discharged as unfit, but was accepted to join the Royal Welsh Fusiliers in November 1915. In 1916 he married Dilys Eames, of the village grocery store.

Val and his friend Sydney Platt joined the Royal Flying Corps in 1916. Sydney was killed on 13 April 1917. Val became an air ace – promoted to Captain and awarded the Military Cross and Distinguished Flying Cross. He was returned from France to help transform the RFC into the professional RAF.

After the war, Val worked for the Vickers Aircraft Company, then became the chief pilot and trainer at Hendon flying school, north London. His students included the Duke of Windsor, the Duke of Kent and Amy Johnson. In 1934 he joined his friend James Martin to form the Martin Baker Aircraft Company. He was the company’s test pilot and was killed in 1942 while on a test flight. James Martin went on to design the ejector seat, which would have saved his friend and is now used the world over.

Also taught at the village school was Cherrie, mother of broadcaster Janet Street-Porter. Another past pupil was Tom Eames-Hughes, who joined the British Government’s Foreign Service and was posted in 1946 to the Far East, where he was instrumental in Malaysian and Singaporean independence.

The school was remodelled in the 1960s. As the Ysgol Babanod (Infants’ School), it continues to educate in the context of Christian belief.

With thanks to Andrew Hinchliff, Adrian Hughes and Martin Val Baker

Other MILITARY HiPoints in this area: