It’s said that a church was founded here c.1230 by Llywelyn Fawr, Prince of Wales, to avoid the walk to the church at Llanrhychwyn. He had many homes in Wales and when he and his wife Joan (Siwan in Welsh) stayed in the Trefriw area they would worship in the remote upland church at Llanrhychwyn. Joan, daughter of King John, found the uphill walk to church, followed by a steep descent, tiring and asked her husband to create a church at the bottom of the valley. 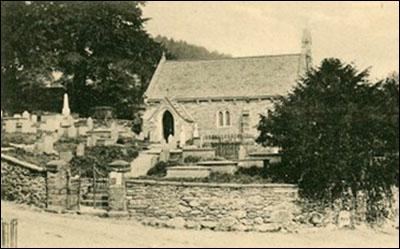 The original structure was rebuilt in the 15th and 16th centuries, and restored in the 19th. The ornately carved pulpit dates from 1633 and the font possibly from the previous century.

Llywelyn and Joan are depicted in stained glass in the church, in a pair of windows created in the 1930s. Also commemorated here is Evan Evans (1795-1855), a bard who was skilled at many styles of poetry and prose. His bardic name was Ieuan Glan Geirionydd, and he grew up on a farm near Trefriw. He first studied at the school in St Mary’s Church, then at the free Llanrwst grammar school. The family fell into poverty when farm rents were raised. Evan became a priest in Cheshire and returned to Trefriw for the last three years of his life. He won chairs at eisteddfodau, edited periodicals, wrote hymns and translated philosophical books. His grave is in the churchyard. 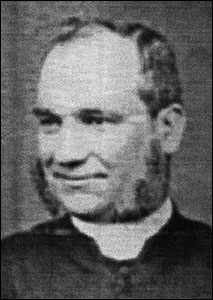 Local historian Morris Jones wrote in 1879 that ministers had neglected the church, where the congregation had dwindled, before the Rev John Gower arrived (in 1869). The rector (pictured left) held services in Welsh and English on Sunday mornings, Sunday school at 2pm and, in the summer, evening sermons in English and Welsh. Hundreds of people from outside Trefriw came to listen, and the church was overfull.

Mr Jones also praised the rector for being unbiased in all his duties (at a time of tensions between Anglicans and Nonconformists in Wales). The Rev Gower organised construction of Gower’s Bridge near Llanrwst to improve travel to and from Trefriw.

A Geneva Breeches Bible, printed in 1589, was displayed in a glass case inside the church until it was stolen in 2013.