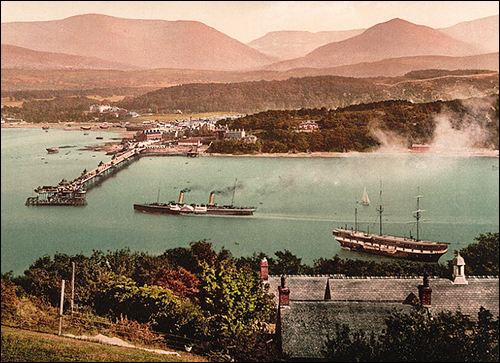 In the churchyard of St Tegfan’s Church are the graves of more than 30 boys from HMS Clio, an "industrial training ship" which was moored on the Menai Strait from 1877 to 1920. See below for their names and details, from parish burial records, grave inscriptions and contemporary press reports.

The graves are a little to the north of the church building. The marker on the map below shows their approximate position. They have a distinctive shape and "Clio" inscription at the top (see photo below).

The 1890s picture on the right shows the view from the Lon Ganol area (eastern end of Llandegfan), with the Clio in the bottom right quarter.

Most of the boys buried here died of illness. Ordinary schools would close for days or weeks during outbreaks of infections diseases, but the Clio boys stayed together. Some lost toes to frostbite in winter. The first captain-superintendent repeatedly had his requests for a more sheltered berth rejected. 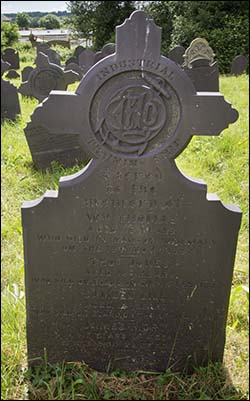 William Crook, buried here, died aged 13 in February 1906 of brain damage sustained when other boys on the ship bullied him. Several of the bullies were later moved to “reformatories”, after Prime Minister William Gladstone said they should be prosecuted. The Home Office ordered an inspection of the ship.

HMS Clio ostensibly prepared boys who were orphaned, neglected or ill-behaved for life with the Royal Navy or on civilian ships. Many chose not to become sailors, and the Royal Navy was reluctant to take sailors from such a background. Children were often sent to HMS Clio by the courts as punishment. In 1902, for example, the Amlwch Petty Sessions sentenced repeat offender William Jones, aged 13, to eight strokes with the rod and to living on HMS Clio until his 15th birthday.

The Clio boys were effectively imprisoned on the ship. Bad weather often made it impossible for them to row ashore for exercise on land. In 1900 a playing field was hired on the shore to improve the boys’ health.

Parents had to pay towards their child’s upkeep. In 1908 a Chester labourer called James Pillington was sent to jail for the eighth or ninth time for failing to pay the weekly 1s required for “maintenance of his son on the training ship Clio”.

Some former Clio boys distinguished themselves at sea. They included Edward Clarke, awarded the Distinguished Service Medal in 1916 for his service on the submarine E 11.

Detailed information and photos are available in The Clio, by Emrys Wyn Roberts, published by Gwasg Carreg Gwalch.

With thanks to Linda Newis