From the sharp bend in the footpath through the old slate quarry you can see part of the towering dry-stone walls which were built for the C4 incline. For your safety, please stay on the footpath and do not cross the fence. 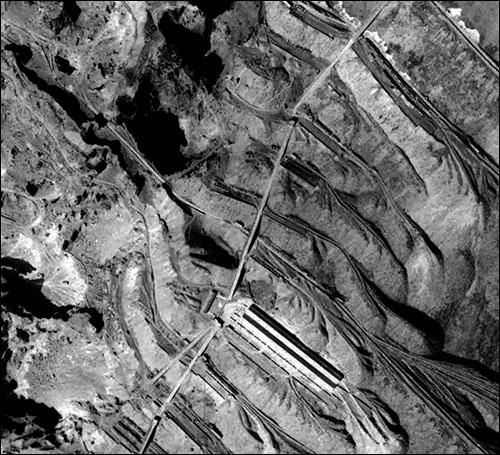 The incline was the fourth in the sequence which started with C1 near the shore of Llyn Peris and ended at the top of C9, c.480 metres (1,580ft) higher up. The C inclines marked the southern boundary of the extensive area where slate was removed from the mountain. Land beyond the inclines was used for processing slate and for dumping vast quantities of waste rock.

C4 was one of the longest inclines in the quarry complex. It had a gradient of about 1 in 3 (rising one vertical metre for every three horizontal metres). It brought slate down to the Ponc Isaf Braich level, where there was a large mill for cutting slate. It passed over three galleries, where apertures were provided for narrow-gauge wagons to pass through the wall.

In the 1946 aerial photo, courtesy of the Welsh Government, the C4 incline runs across the centre. The long mill building is in the bottom right quarter. The waste tips of each gallery are on the right.

As you view the walls of the C4 incline from the bend in the path, notice straight ahead the small aperture with the unusual triangular arch. You are standing on what used to be the gallery known as Dyffryn. Rubble wagons were moved through the opening to the end of the narrow-gauge railway track, where “rubbish men” – paid per ton of rock – would tip out the waste.

Some of the gallery’s wooden railway sleepers are embedded in the footpath behind you. Steel rails were attached to the sleepers.

You can see several rusting rubble wagons in the pit below the gallery.