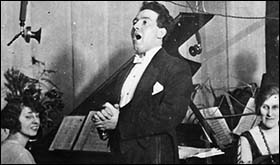 The BBC’s first broadcast in Wales was made from the first floor of 19 Castle Street on 13 February 1923. If you’ve just scanned the QR codes at the entrance to Barracuda Marketing’s offices, look up and to your left to see the bay window behind which the small studio had been set up.

The first radio broadcast featured Mostyn Thomas, a baritone from Blaina, near Ebbw Vale, singing the folk song Dafydd y Garreg Wen live on air. He is pictured on the right. The photos of the broadcast on this page are courtesy of BBC Cymru Wales. 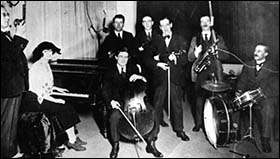 The radio studio here was labelled 5WA and covered south-west England as well as Wales, leading to complaints from the other side of the Bristol Channel that the broadcasts included too much hymn singing and other Welsh output!

The station added impetus to the idea that Wales was a distinct nation which should have its own institutions, and eventually BBC Cymru Wales was established in February 1964. It continues to provide television and radio programmes today.