This hotel is named after the historic bridge which crosses the river Dee here. 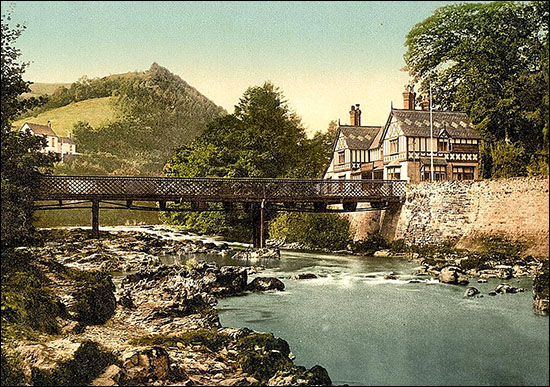 Previously the Bridge Inn stood on this site. The inn was built by Exuperius Pickering, who erected the original chain bridge in 1817. The inn was at the corner where the road alongside the canal feeder turned onto the bridge. You can see a photo of it on our page about the chain bridge.

The Chain Bridge Inn, built in the 1860s, was much larger but had to built on the same spot because the road was still in use. It was a challenge to fit such a large building between the road, river and canal feeder! The frontage was close to the stone wall forming the riverbank.

Proprietor Mr Roberts advertised “pleasant apartments” here in 1869. The building was known as the Chain Bridge Hotel by 1881. The photo shows the hotel c.1890, with the second chain bridge.

The Great Western Railway prosecuted the hotel’s licensee, Thomas Marchant, in 1902 for his treatment of fellow train passenger John Lodwick, a Llangollen butcher. Having travelled from Berwyn station to Llangollen, Thomas left the train briefly to buy a cheap ticket to Liverpool. Returning to the train, he found John in the seat he had occupied. John refused to move. Thomas shook him fiercely and then squashed him into a corner all the way from Llangollen to Ruabon. Thomas was fined £1 and had to pay costs.

In the 1960s the hotel was extended into the area previously occupied by the road. The chain bridge had become pedestrian-only, with the nearby King’s Bridge available to vehicles from 1906.

In the 21st century the hotel was owned by transgender businesswoman Stephanie Booth, who had come to prominence in a BBC TV documentary in 2009. As Keith Hull she had fathered two children before having a sex change in 1983. She later founded a clinic for transgender people in Manchester. She died in a tractor accident on her farm near Corwen in 2017, five years after selling the Chain Bridge Hotel to Seamus O’Keeffe.