Behind the Georgian frontage of this former coaching inn stands a much older structure, reputedly dating from c.1430. Beer and food are still stored in vaulted cellars, possibly built in the 18th century. The hostelry was once known as the White Bear.

According to tradition, soldiers loyal to Sir Richard Evans took a last drink here in 1485 before marching off to join the army of Henry Tudor, who had landed in Pembrokeshire after exile and was soon to win the Battle of Bosworth to become King Henry VII.

Some of the wood in the oldest part of the pub reputedly came from a yard in Newport which salvaged timber from old ships. You can see slots along one of the beams which imply a different previous use. Also in this room are the push-buttons which customers once used to summon the ostler (man who looked after horses), “boots” (looked after customers’ footwear), maid or waiter.

In 1867 a public meeting was held at the Bear Hotel in support of a scheme to build a railway through Crickhowell, connecting to Abergavenny and Brecon. Some of the speakers felt Crickhowell was being ridiculed for lying seven miles (11km) from the nearest railway while remote villages such as Llangammarch had their own stations. The Vale of Crickhowell Railway Company was formed, but no railway was ever built.

Instead the townspeople had to make do with a coach service between Abergavenny and Brecon, launched in 1 May 1875. A newspaper reporter who travelled on the first coach noted that the driver paused at the Bear Hotel, “where the horses’ mouths are washed out”. 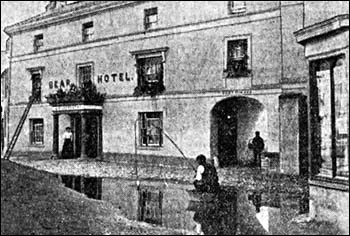 Horse-drawn vehicles were still the main mode of transport in 1899, when the Bear Hotel advertised for a “Groom-Coachman, able to drive a pair” (two horses in harness). The stables were behind the property and accessed from Standard Street. The arched entrance which is still marked “Post Horses” was for mail-coach horses. Just outside this entrance are two stone steps, probably to help people to board and alight from mail coaches.

In 1906 a large puddle formed on the road outside the Bear Hotel during heavy rainfall. As the photo shows, a local man placed a tub in it and pretended to fish. This was a satirical act. Some townspeople had been campaigning for the public to be allowed to fish and boat on the river Usk. They believed this would attract tourists. The man in the tub claimed he was the first person in Crickhowell to obtain free fishing and boating in the district!

Robert Masters became the hotel’s licensee in 1919. He had joined the Royal Army Medical Corps in 1914 and later received the Military Cross for his gallantry. Former Landlord Franklin Hardeman served in the war as a South Wales Borderers officer.

In 1915, Bear Hotel landlord Cyrus Thomas coordinated donations of livestock by local farmers for an auction in aid of the National Fund for Welsh Troops. Two years later he was treasurer of a fundraising appeal for a gold watch for Lieutenant Amos Barroll, who received the Military Cross for remaining at his post for five days in a defensive effort which was considered the first time British machine guns had knocked out a battery of German “whizz bangs” (artillery firing light, rapid shells).

The building was extended rearwards in the 1980s, with the addition of bedrooms and a new kitchen.