Isallt was built in the 1880s as a home and surgery for Dr Robert Roberts, who was also a poet, fly-fisherman and Blaenau Ffestiniog’s first car owner. 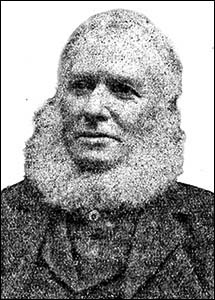 Robert (1839-1914) was born at Llan Ffestiniog into a family of expert bone-setters, documented as far back as the 17th century. The family was associated with Isallt Fawr farm near Bryncir. Isallt means ‘below the slope’. To hear how to pronounce Isallt, press play:

After qualifying as a doctor, Robert worked at the Oakeley slate quarry hospital in Blaenau Ffestiniog before setting up his home and surgery here – closer to most people’s homes in the town.

His skills as a surgeon were in constant demand, partly because local slate quarries were so dangerous. He reputedly repaired the fractured skull of a Norwegian tourist using a piece of bone from a dog!

Robert, who sports his distinctive facial hair in the portrait on the right, wrote books on fly fishing and penillion (spoken poetry with musical accompaniment). He competed in poetry under his bardic name Isallt. He chaired the county council after retirement in 1896.

A Porthmadog sailing ship was named Isallt in his honour in 1903 but sank in 1908 after a steamer rammed it in thick fog off Cornwall. All crew survived, as did the captain’s wife, who left the schooner in her “night attire”.

The building has had many later uses, including as a health centre and a tourist information office. Today it’s a guesthouse and café. You can see a plaque presented by quarrymen to Dr Roberts near the entrance.